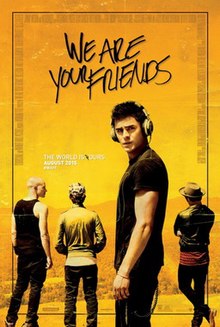 Taking place in LA, We Are Your Friends is a film about an aspiring DJ called Cole (played by Zac Efron), who is given the opportunity to flourish under the mentorship of a well known member of the industry. This opportunity is plunged into uncertainty when factors from other places in his life start to force him to make difficult choices. The film stars Zac Efron, Emily Ratajkowski, and Wes Bently, and is written and directed by Max Joseph. The film is independent, and centers around the DJ and LA culture of the time. The film was distributed on limited release, and received little to no critical recognition.

I went into this film ready to dislike it. I can’t stand EDM, I think it’s trash that is doing harm to my generation’s way of thinking. Or at least I did. This unfavorable opinion (putting it lightly) of electronic music was a good reason to go into We Are Your Friends with incredulity, which ended up working in my favor as I ended up pleasantly surprised by the film in most all respects. It’s a good film, though not necessarily a great film. It sports all around strong performances. Efron, who continues on his bid to prove himself as a serious actor, does that and more in a relatable, gentle performance of Cole. Emily Ratajkowski does much the same in her capacity in the film, though the real star in my opinion was Wes Bently, who delivers a surprisingly powerful performance as the known-quantity mentor figure.

The film starts off caricature-ish, as a clichéd depiction of an irritating club culture. The few insightful moments in the first thirty-odd minutes would be an indicator, however, for the richly interesting exploration of said culture that would follow. It’s a generally average screenplay with a couple gems in there somewhere. This is made up for, I think, by the energy and zest the director has brought to the lighting and the sound. There’s a constant pep that keeps you from losing interest, which helps to sell the circumstance to even the most doubting of audiences, like me. Cole is a decently rounded character, I can’t think of any noteworthy complaints with this gentle hearted and passionate musician. For that matter, all the characters have an appropriate amount of depth and nuance to them, enough to tug at an audience’s strings. I really enjoyed Efron and Ratajkowski on screen together, I think they had a natural, unforced chemistry that shone through.

The biggest triumph of the film, for me, was not on a technical level. As I’ve mentioned, I’m not a fan of EDM. I find it unfeeling, and if you take the emotion out of the music then what’s the point? This is an impression that I maintain for most EDM, though after seeing this film it’s entirely possible that this stance might not last much longer. Cole takes such passion, energy, and love in the music he makes; such feeling and thought into putting his music together, that there’s something weirdly ‘organic’ to the electronic music he produces. The thought he puts into what he does, particularly in one memorable scene where he explains how to ‘amp it up’, is intriguing. It made me think about EDM and the art of DJing that I had never stopped to consider.

Remember, this is a good film, not a great one. For all I’ve talked about quality performances and interesting conceptual exploration and discussion, it doesn’t save from the fact that it is, in the end, not exceptional. There is something though. While it might not be the most sophisticated film in the world, it changed my mind about something, it made me think. EDM is music I historically hate, and the idea that watching this film, which I had a negative predisposition toward for that very reason, made me seriously reconsider my ideas of a whole genre of music, is impressive. I’d strongly recommend this film to most anyone.