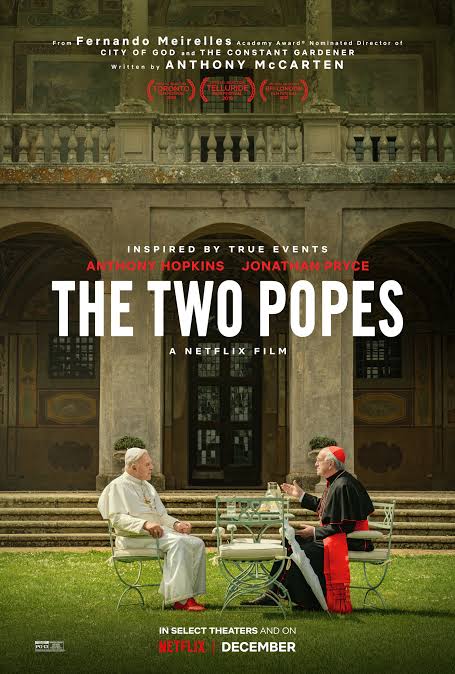 ‘The Two Popes’ emerged to be one of the best films of the year with its release in late August 2019.  The film revolves around the conservative Pope Benedict (Anthony Hopkins) and liberal, future Pope Francis (Jonathan Pryce), highlighting a clash of personalities and ideologies, in search of a new path for the Catholic Church. This factually based drama journeys through various emotions from curiosity to suspicion, grudging respect and eventually a warming friendship. Though the film is largely multiple conversations between two elderly men, it managed to keep an 18-year old intrigued till the very end and smile once it was over.

The film begins in 2005, after the death of Pope John Paul II and right of the bat, we are hooked by getting a peek inside the Vatican, with the cardinals of the Roman Catholic Church electing the next Pope. We are introduced to Joseph Ratzinger (Pope Benedict XVI) and Jorge Bergoglio (Pope Francis) within the first 10 minutes of the film as Jorge Bergoglio whistles the tune of ‘Dancing Queen’ by ABBA before the Papal Conclave and it eventually leads to one of my favourite scenes of the film – the election of the new Pope with “Dancing Queen” playing in the background – you cannot help but smile. Pope Francis would eventually replace Pope Benedict XVI after 8 years in an unusual transfer of priestly authority. “I disagree with everything you say,” Pope Benedict told Jorge Bergoglio, with a large difference in etiquette and an ideological, temperamental and philosophical gaps that seem unbridgeable but still, how this evolves into a heartening friendship is absolutely amazing.

The wrestling ideologies between the two men is unexpectedly entertaining as you try to understand their faith, discover what happens inside the Vatican during a Papal Conclave, uncover secrets of the Church and smile at Pope Francis’ personality. Much of this credit goes to a brilliant screenplay by Anthony McCarten, who manages to capture the essence of a mismatched-friendship, leading to riveting perspectives and eventually to a warm friendship. After his past works being biographical dramas as well, Darkest Hour, Bohemian Rhapsody and The Theory of Everything, McCarten seems to have mastered screenplay writing in this genre. It isn’t easy to recreate conversations between Popes but he manages to accomplish this task in a rather smooth, polished manner. His work stands out throughout the film, outshining the other features – with scenes portraying philosophical conversations between the Popes, to them doing the Tango in front of the security – you cannot help but smile in awe.

However, this is not to say that the other aspects are lacking in any way. Director Fernando Meirelles delivers skillfully while directing actors like Hopkins and Pryce, with the mot interesting aspect being the pacing of the film, almost reflecting the pace of Pope Francis’ tango.

Apart from the screenplay, superior performances were the other aspect on which the film depended on and that is exactly what Hopkins and Pryce Have delivered. Both performances are well worthy of nominations for best actor in lead and supporting for this year. Pryce is an affable, empathetic personality, with distinct expressions making him the increasingly understandable despite the 5 languages spoken throughout the film. He effectively conveys Bergoglio to be a man of simplicity and possible the change needed in the Catholic Church. Hopkins does what he does what he does best – his subtle gestures, whispers, sighs and fidgeting results in some of his best work in years. This turns him from the presumed villain into an almost tragic figure, evoking sympathy inside every viewer – a brilliant mind morphed into a troubled soul.

It isn’t perfect though. Bergoglio’s flashbacks are cumbersome with mismatched pacing; losing the brilliant momentum that had built up in the first half of the film. The flashbacks are not irrelevant – they covey Bergoglio’s political views and address his demons but it could be portrayed in a different manner. IN my view, if the film was only about the two men talking, it could have possibly been a masterpiece. When Bergoglio and Pope Benedict are together: at the castle and then in the Sistine Chapel, the actors bring forth the spiritual psychological dimensions of their characters in an interplay which is fascinating to observe, flattened by the flashbacks.

All in all, the film beautifully portrays the fight between traditionalism and reform. While Pope Benedict XVI is seen as a voice of authority, Bergoglio is impatient and attempts to focus more on issues like climate change and poverty; he is seen as a figure of necessary change. The brilliant interplay between their conversations as they counter each other’s metaphors are captivating and the stakes: the future of the Catholic Church. The concept of Jesus’ representative on Earth being an imperfect figure is a difficult notion, but Meirelles, supported by ingenius screenplay by McaCarten and outstanding performances by Hopkins and Pryce, handles it masterfully, not forgetting that ‘humour and absurdity hold as much a part of the human character as hopelessness and desperation. The film promises to be an enjoyable watch, even if you are not Catholic or religious. It leaves you longing for more, hoping that maybe one day you could have a conversation this rich and meaningful, maybe even with the Pope himself.