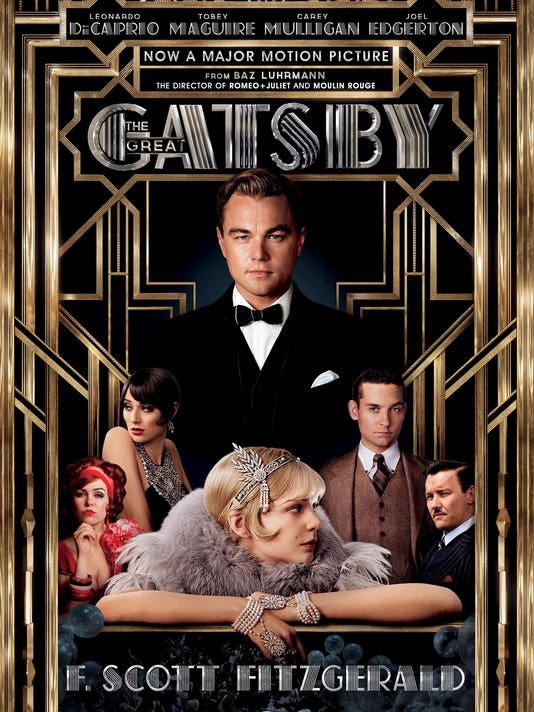 The Great Gatsby is the onscreen adaptation of F. Scott Fitzgerald’s celebrated novel of the same title, starring Leonardo DiCaprio, Carey Mulligan, and Toby Maguire among others. The story, for those unfamiliar, surrounds the narrator Nick Caraway’s observations of the events surrounding the mysterious millionaire Jay Gatsby and Caraway’s extended family: Tom and Daisy Buchanan. Gatsby, portrayed by DiCaprio, has a consuming desire, for the satisfaction of which he forms a bond with Nick Caraway, a bond seller and budding writer, to help him achieve his defining goal. The film, released in 2013, is directed by Baz Luhrmann, and is accredited with two Academy Awards for Costume and Production Design.

I hadn’t seen this film in quite some time before seeing it again just the other day in order to write this review. I remember seeing it in the theatre as it released, and not really taking to it, then. It was a little too overdone for me at the time, lacking in much measured pace and seeming a little too larger-than-life. These are definitely still drawbacks, the pacing issue is real (which was really avoidable seeing as they’ve adapted 140 pages of source material into a 2-and-a-half-hour movie), and the palette is one of two extremes at pretty much all time. That said, the visuals are only overbearing occasionally, and even when they are they couldn’t be said to be inappropriate, given the context of the story.

When I saw the film first; I hadn’t yet read the book, so I wasn’t in a position to understand the need for the ‘gaudiness’ which I would later describe as artistry. I’d definitely recommend reading the book before you see the movie; there’s no discussion to be had when it comes to which should anchor which. The elaborate paintings Fitzgerald provides in the novel act as food for Baz Luhrmann’s well-tuned visual eye. You know the opening thing to all Disney movies, the one where the camera pans around from behind the Disney castle and there’s fireworks and that soundtrack playing? If you can’t place what I’m talking about, google it and come back, because it would better be able to explain the aesthetic spin Luhrmann’s put on the entire set of the film. I wouldn’t be surprised if Gatsby’s legendary house is, in the film, inspired by something at Disney World. I looked it up and it turns out I’m wrong, but the image is still very much valid. It’s like the whole world is lit from below, so what you see is luminescent in a way that you can’t put your finger on. I just have to mention, as well, the scene that introduces Daisy’s character. Luhrmann can make a room fly, is the only thing I could possibly say after that scene. All in all, The Great Gatsby is a visual treat, more so than in any of it’s other aspects.

The performances are pointedly good, as far as my interpretation of the book goes. DiCaprio captures every ounce of Gatsby’s irresistible, magnetic, and all-too-clean charm. Tobey Maguire strikes me as a miscasting; He was a little more plump-faced than I saw Nick in my head, and his response a little too emotional. His performance is okay nonetheless, but I’m don’t think he was the best fit for the role. The subplot surrounding him and Jordan Baker is not especially missed, possibly because of the blandness of her portrayal. Carey Mulligan as Daisy Buchanan is a treat. Joel Edgerton as her husband, slightly less so. He doesn’t carry the physical brutishness that Tom should’ve had. DiCaprio and Mulligan’s chemistry is wonderful enough to make up for it, however.

There are elements of the symbolism that the film actually gets better than the book, most notably T J Eckleberg’s ‘eyes of god’, and, I daresay, the green light. The significance of other symbolic elements and themes are left more or less untouched; things like the dog, the theme of new vs old rich, etc, are sidelined for the plot of the film, which is understandable to an extent. That said, since the source material is a meagre 140 pages, I feel like it might have been doable. They choose to compress the first three-odd chapters into the first half hour of the film, and expand on the following half of the book into roughly two hours, displaying a clear skewing of importance from a storytelling perspective.

The novel is a lot. There’s a lot of things, comments and narrator’s schtick, that can’t be replicated into film. In that sense, they made a very good decision to include some voice-over from and passages form the book. After reading the book, the first question you’d have concerning the quality of a film adaptation would be the if they captured the aesthetic. On that point, triple check. The next would be regarding the portrayal of Gatsby. Another triple check. As you run down this list of questions, you’ll find, more often than not, that the film has done a solid job of handling the important things extremely well. The pacing problem persists, but once you get accustomed to the rhythm of the film it feels less odd. The story compression is irritating, but not so much so that it leaves anyone disinterested; this story just stresses on different things. All in all, there’s little wrong with this film, which is a funny conclusion to come to especially keeping in mind the fact that it’s seen as so inferior to the book. This might be one of those times, few as they are, that the book-reader in me has to get off his high horse. There are elements that obviously can’t be translated, but, as film adaptations go, this is well above average.