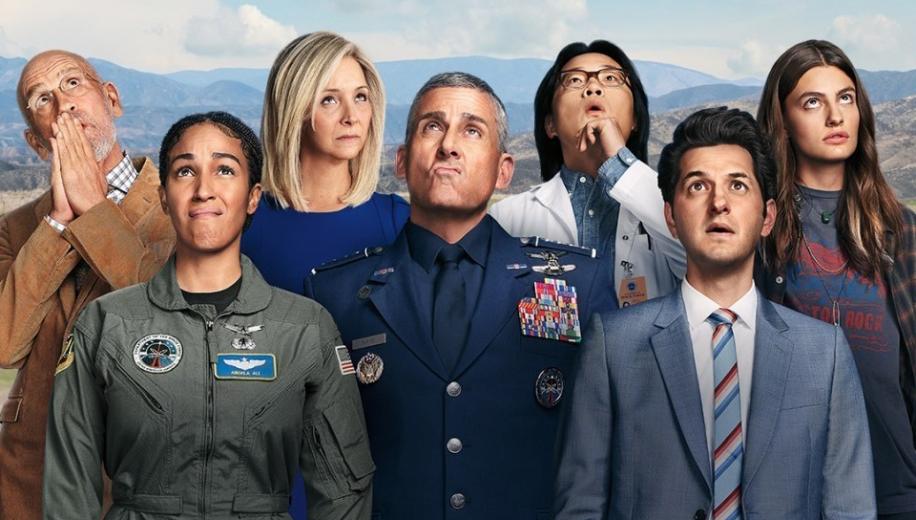 Space Force is a Netflix original comedy series, created by the same group of people behind The Office and Parks and Recreation. The series is a satire of President Donald Trump’s unveiling of a new branch of the United States Military, Space Force. The story follows Mark Naird, played by Steve Carrell, a four-star Air Force General who, after his promotion, expects to be put in charge of the Air Force. However, in response to POTUS’s tweet announcing Space Force, Naird is put in command of the new branch. The show is about his and his staff’s lives as they attempt to fulfil the promise of Space Force. The show has been highly anticipated, and stars Steve Carrell, John Malkovich, Ben Schwartz, Jimmy O. Yang, Tawny Newsome, Diana Silvers, and Lisa Kudrow among others. It was created by Carrell and Greg Daniels.

I had a very measured level of anticipation for this show. The cast and creators have set themselves a very high bar, and, while the trailer and premise are pretty good, I didn’t want to get ahead of myself. Having seen the show, I’m really glad I did that; not because it’s bad, but because my measured expectations were absolutely met.

Season 1 of Space Force is pretty good no matter which way I slice it. I’ve seen a lot of articles calling it a little less than that, which brings me back to measured expectations. It’s a very different show from the aforementioned mega-hits of Greg Daniels Incorporated. It is a workplace comedy, so you could argue that the fundamentals come from the same place, but the size and scale of Space Force, not to mention a slight production budget hike from a mockumentary style, gives it a definitively different feel. The characters and their quirks are still the main sources of comedy, but we’re not in Pawnee anymore.

It’s a pretty damn well performed show. Malkovich, Yang, and Newsome are pretty great and consistently funny throughout the season. A combo of nice writing and really very good performances from those actors ended up giving me a laundry list of characters that, without having the most depth or development in the world (possibly excepting Malkovich, who’s character is of a slightly higher order), were always good for the laugh and plenty likeable. Ben Schwartz never anything but awesome and hilarious, and this is no exception to the rule (which, in case it was unclear, is that Ben Schwartz is awesome and hilarious). Then we come to Naird himself, which is a slightly more complicated situation. Carrell is the most notably strong performance the whole way through. My slight issue comes up when the question becomes one of the character’s consistency. Naird in episodes 1 and 2 is a very different character from Naird in the last 8 episodes of the show. He starts as a seemingly irrational, not particularly intelligent guy, not unlike the POTUS he serves, whose comedy comes from his incompetence. That character changes, for the better, it should be said, after the second or third episode of the show. He becomes a much better man, smarter, more sincere and well-meaning as the season progresses. One could chalk that down to character growth, but it came with little to no trigger. It was strange, for example, in the second episode, to act like a complete idiot in the control room but then have him come home and help his daughter with Trig, which I don’t even understand. Again, the change is good, but inconsistent from a writer’s perspective. Speaking of his daughter, Naird’s family life is one of the weaker aspects of the show. Not all of it’s poor; the fact that we have no idea why Lisa Kudrow is in prison is kind of hilarious, and bits of his interaction with her are good, but are, on the whole, underdeveloped. That having been said, the show is capable of good sincerity, a lot of coming between Naird and Mallory (Malkovich’s character), whose relationship over the season is nicely done.

One other crucial aspect which I thought was pretty cool was the largely tangential way they deal with Trump. It would’ve been easy for them to make Trump jokes the whole way through, the whole series being based on something The President did. While there is some POTUS-dropping in there, there wasn’t really much more than there had to be, and I for one was really impressed with the way they handled him and his rhetoric. Using the conflict with the Chinese at the end, for example, as indicative of a categorically dumb-ass testosterone-driven approach to foreign policy and the military, was a lot more subtle than it could’ve been, and I for one was pretty impressed with the way they dealt with Trump as a character.

All in all, I enjoyed Space Force. It’s not the holy grail of comedy television, which I think those disappointed probably expected going into it, but it’s a solid foundation, considering an ending that begs for a second season. Something to keep in mind as well is that both The Office and Parks have comparatively poor first seasons. If we’re in for a similar trend, Space Force will be a glorious show one day. For now, Season 1 was pretty good, enjoyable, solid entertainment, and enough to get me excited for more to come.