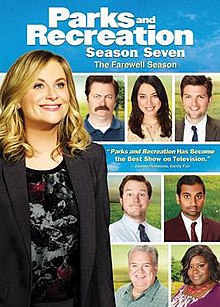 Sparked as a sister show to The Office, Parks and Recreation ran for 7 seasons between 2009 and 2015. The show centres around a fictional town in Indiana called Pawnee, and, more specifically, the Parks and Recreation department of the local government. Created by Michael Schur and Greg Daniels, who also created the US version of The Office. Parks and Rec stars and ensemble cast, including Amy Poehler, Nick Offerman, Rashida Jones, Aziz Ansari, Chris Pratt, Aubrey Plaza, Retta, Jim O’Heir, as well as Adam Scott and Rob Lowe from the tail end of season 2.

Parks and Rec has to go down as one of my favourite shows of all time. I haven’t made that list yet, but when I do, this is going to be very high on that list. I fell in love with this show. Admittedly, I had to put up with the first season, which would slightly generously be described as ‘meh’ by the more allowing audience member. There is no denying, as far as I’m concerned, that the first season (which is only 6 episodes, I should point out) is sub-par as compared to the rest of the show, in terms of its comedy and its all-around interest factor. It’s excusable; you can see the writers finding their feet about the characters, and, more importantly, the tone, which tries far too hard to replicate what was found in The Office. After the first season, however, they locate that footing, and they locate it well.

Parks and Rec has some of the most likeable characters I’ve ever seen on television. Leslie Knope, the illegitimate protagonist in a show that more often than not tells B and C stories in each and every episode, exudes this positive energy that I submit to you it is impossible not to find compelling. Amy Poehler does an incredible job in the role that she will never be able to leave. Her sincere, energetic, and borderline obsessed love for old-fashioned public service and the people that help (help is a strong word) her do it is a genuine addition to the sum of happiness in the world, an addition I think we all sorely need right now. In spite of that, she isn’t even my favourite, as Nick Offerman’s very nearly autobiographical portrayal of Ron Swanson might be among my favourite performances of all time. I’m not even going to try to get into specifics with Ron, other than to say he’s undoubtedly my favourite, for fear I’ll go on too long. I haven’t even mentioned the rest of the Parks Department, each and every one of whom is a deeply realised character in the show, providing both comedy (hell lots of it) and some surprisingly potent and “real” moments as well. I’d get into special mentions if that special mentions didn’t literally contain every single other character, from Ann Perkins to Jean-Ralphio (fans of the show will spot two references to one character in that sentence). I’ll only mention, for the sake of his stardom, that you haven’t seen Chris Pratt until you’ve seen him as Andy Dwyer on this show.

Stylistically, Parks and Rec adds its own flavour to The Office’s mockumentary-talking-heads camera style. For example, unlike The Office, more or less every single character uses the camera the way Jim would do in The Office. The similarities to The Office exist, there’s no doubt about that. Leslie and Michael Scott are two sides of essentially the same, or at least very similar, coins, and if Jerry (we’re going with the original name) is Toby, there are a lot of parallels to be drawn. There’s something about it, though. Something about the characters and the situation, something that’s a very different flavour from its sister show. There’s a strange optimism, embodied mainly by Leslie and her own force of nature, which gives Parks a very different energy. Aubrey Plaza’s character, April Ludgate, and her change over the course of the show, is actually a near-perfect illustration of what I’m talking about. Of course, she never loses her demonic charm (in case any halfway viewers of the show are reading) but there are gears within her that visibly shift, with her relationship with Leslie being one of a few indicators.

It’s also really tightly wound comedy. Parks episodes are about 21 minutes long, during which they always have a B, and, very often, a C story. That’s a lot of plot to get through in any given episode, which means two things. A) there are definitely 45 minute cuts of this show which are definitely amazing, and B) the show is almost incapable of drag. It’s a challenge to do everything that needs doing in those 21 minutes, but the writers pull it off and it’s beautiful. And hilarious. I can’t emphasize this enough. This show is hilarious. They lean on their characters for comedy, as opposed to situation, which is perfect considering the nature of the characters in the first place. I don’t want to get into specifics as far as running gags and such go, just because I don’t have that kind of word count here (or at least Aryamaan won’t let me have that kind of word count here), but suffice it to say that this is probably the funniest show I’ve ever seen.

I don’t normally do full show reviews anymore. I go season-wise as they release, but I’ve more or less stopped writing reviews for full shows. I watched the entirety of Game of Thrones a month or so ago and not a shred of evidence appeared on this site. Parks and Rec is worth breaking every conceivable rule. I can only reiterate what I’ve already said to describe Leslie’s character to sum up my experience of Parks (mainly cause I can’t think of a better line), which is that Parks and Recreation is a genuine addition to the sum of happiness in this world. On top of being hilarious, it has the potential to be incredibly profound, to an extent that it actually has no business doing. Speaking of things it has no business doing, the last two episodes of this show, a two-part finale, had to have been one of the most satisfying 40 minutes of television, and series finales, that has ever been. A fitting end to a comfortable triumph of comedic television. Bravo.