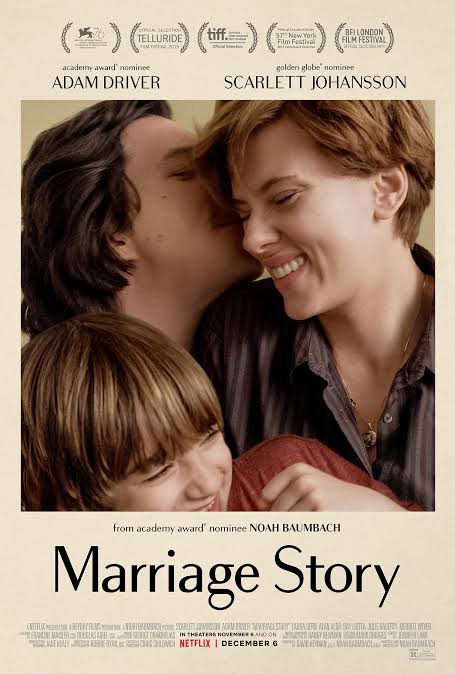 One of the most critically celebrated Netflix originals on the service, Marriage Story is a film written and directed by Noah Baumbach, writer and director of the Meyerowitz Stories among others. It is the story of a marriage, that of Charlie and Nicole Barber, portrayed by Adam Driver and Scarlett Johansson respectively. The film follows the couple’s divorce, and the struggle to keep their separation respectful and amicable in a system that demands alienation and conflict within a relationship. The film also stars Laura Dern and Alan Alda as lawyers, for which Dern was recently commemorated with a Golden Globe.

I was trepidatious going into Marriage Story, because, mainly, of Noah Baumbach’s previous works. I haven’t had a chance to watch many of his films, but The Meyerowitz Stories, with respect, was pretty poor to put it relatively mildly as far as my opinion on it goes. It’s a fairly well regarded film, so it’s possible I just don’t respond to the style. To me it just felt like he was trying a little too hard to make it “realistic”, a little too much forced awkwardness. With that memory in mind I went into Marriage Story, and was absolutely blown away by what I came out with.

Marriage Story is a fabulous film; well written, well-conceived, and a performed like their lives depended on it. Seriously, Adam Driver and Scarlett Johansson deliver the performances of their careers in this film, conveying a confusion of a changing lens for their characters’ love. I wouldn’t know about the accuracy, but the communication of the conflict of having to do something with a love that doesn’t just turn off is extremely effective, a lot of the credit has to go to Driver and Johansson’s stellar performances, alongside Baumbach’s writing.

Baumbach’s directorial style is applied here to poignant effect. That, or he’s scaled it down since Meyerowitz Stories, either way, the brute rawness and occasional cringeworthy awkwardness works for the story, and even adds to the mounting heartbreak of watching what is obviously communicated as a loving relationship disintegrate into cheap courtroom pot-shots. With the possible exception of a sequence involving a child support observer coming to watch Charlie with his son Henry, the rawness of the shot composition and the dialogue, combined with two actors who are wholly committed to executing exactly that version of the story, make for a deeply emotionally stimulating experience. The things that hit hardest were the little hints, the minuscule reminders of how close they were and how intrinsically they knew each other. Nicole tying his shoes, knowing what he’d want for lunch, it makes for a reminder of just how much they did, and, to an extent which is difficult to articulate, have each other’s backs.

If I had two major problems with the film, it would have to do with the fact that the narrative was skewed in the way it was told. The emphasis is placed, pretty unabashedly, on Charlie’s experiences and struggles throughout the film. Nicole gets her day in the sun, but the comparison is pretty hard to draw. There’s a wonderful scene relatively early in the film where Nicole explains her issues in the marriage and why it wasn’t working out for her. She talks about being side-lined and not being taken into account, which are legitimate grievances for which I can of understand the problem in the relationship. The difference, and this is key, is that with Charlie they do a lot more than tell us what his struggles are, they show us, in ways that are compelling and heart-breaking. We watch him try to split his time between two places, try to spend time with his son despite a legal battle, try to keep a hold of things he holds dear, and we watch as those things become harder to fight for in ways that weren’t fair to him. The legal battle was instigated by her in the first place for no apparent reason, other than someone just randomly said “hey you should call this lawyer”. Until that point, they were pretty resolute about how they were going to keep it amicable, and that move, compounded by her strategy in going to multiple lawyers and eventually settling on one as combative and manipulative as Nora, is what escalates the whole affair into what it becomes. And all for a grievance that we’re only ever told about. There is absolutely no indication that Charlie was especially dominating, instead, evidence of his tragedy despite putting trying to be a stellar human being, in spite of the situation. He is shown as kind, sincere, friendly, all the things that Nicole said about him in her letter during a fabulous opening bit. I’m not saying that Nicole’s grievances weren’t fair, I’m saying that as an audience member I haven’t been shown. During a beautifully performed and written, strikingly visceral fight scene between them, Charlie has a line “you wanted it until you didn’t. You were happy until you weren’t.” As far as I know, based on the evidence given to me in the story, he’s absolutely right. I take issue with that skewing of importance when it comes to the perspectives of the two protagonists, and I wish some 15 minutes could’ve been added to the film showing us how Charlie was dominative. A good reason for why Nicole went to a lawyer might’ve been nice too, because, as it stands, Nicole was very, very close to becoming an antagonist in the film, while all we see is tragedy happening to Charlie.
But not quite. I’ve gone on and on about that flaw, and, while it most certainly is a gaping hole in my opinion, it does not detract nearly as much from the quality of the film as it did space in this review. Marriage Story is a wonderful film, with all the qualities it needed to have at exactly the moments they needed to be there. Comedy, tragedy, quality characters developed expertly, a raw and genuine tone, as well as one of the most compelling openings to any film that I’ve ever seen. Did I tend to feel worse for Charlie than they do for Nicole? Absolutely, and that’s a fundamental problem that I personally had. Maybe you’ll disagree, I know I’ve spoken to a couple people who do and that’s a perfectly valid place to be as well. The end result doesn’t really change: a wonderful, tragic, irritating, funny, infuriating, loveable film. All of the emotions really, as Adam Driver and Scarlett Johansson will no doubt attest. This was one of the best of the year.