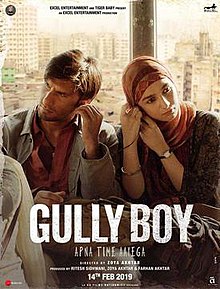 Directed by the illustrious Zoya Akhtar, Gully Boy is the story of a passionate young man, Murad Ahmaed (portrayed by Ranveer Singh). A rap and hip hop lover, Murad “Gully Boy” Ahmed makes his way in the musical industry from Dharavi slum in Mumbai, India. The film is based loosely on a true story, that of two underground artists from Mumbai, Divine and Naezy, and stars Ranveer Singh, Alia Bhatt, and Kalki Koechlin among others. The film has been met with largely strong positive critical response, and has taken Bollywood by storm both as a film and as a soundtrack.

I was very much looking forward to this film. Zoya Akhtar is one of the few highest quality filmmakers in Bollywood at the moment, attested to by the fact that I’m writing a Bollywood review (shocking, I know). The lady made ZNMD, which is the equivalent of a rubber stamp saying “will definitely watch whatever she makes.” I saw the trailer and was excited, however, it took me till last week to actually get a chance to watch it, for which I got a lot of flack (deserved, of course). My expectations were very high, and were absolutely met by a film that positively oozes character, flair, and energy. Not my favorite Zoya Akhtar film, ZNMD is still king of the hill for me, but there is absolutely no denying that this is a very, very good film.

I had, until this point, more or less given up on the idea of Bollywood delivering a truly good ensemble performance in the foreseeable future. Strong individual performances aren’t an uncommon occurrence. However, I honestly did not imagine witnessing such a broad and quality showing from an ensemble cast from this industry. Ranveer Singh is extraordinary, truly, but it’s not just him and Alia Bhatt that deserve recognition. From Siddhant Chaturvedi (MC Sher) to Ikhlaque Khan, the entirety of this cast deserves the highest applause for a phenomenal display of acting ability. Credit goes, naturally, to the writers and director as well, for fleshing out an entire spectrum of rounded, developed characters, but good writing has been wasted in the past and this was not an example of that. The film does an excellent job of juggling it all too. Gully Boy is a dense film, there’s a lot happening with a lot of threads. A lot of times you’ll see even the best of narrative intentions squandered by way of trying to hold too much; not, however, in this situation. Relationships, particularly that between Alia and Ranveer’s characters, are pressure pointed with expertise. To be frank, had it not been for the purity and strength of their characters’ relationship, I don’t imagine I would’ve much liked Safeena’s character. Alia does a fantastic job, but her character has a little more edge than I was comfortable with. Her’s was the facet I enjoyed least in the film, but it was more than made up for by a glimmering chemistry between her and Murad.

Writing in the film was generally very strong, with a couple moments of dialogue that could have done with being a little less clunky but an overall very, very strong piece of work. Zoya Akhtar has done a phenomenal job, as per usual, with the same sense for style with which we are accustomed. The story is told against a backdrop of Mumbai’s diverse cityscape, from high-rises to slum cities like Dharavi, which is obviously not uncommon for a Bollywood film. But the soundtrack and the immersive camera work allow for some magic to happen. The visuals don’t technically change, but there’s something so infectiously stylistic about the way the film is put together, with most every shot conveying an intricacy and artistry to the thought process behind the image, the likes of which are impressive on any screen, not just a Bollywood one. The way she’s put Mumbai together, from the very first scene, it manages to convey the full breadth of Mumbai’s situation, puts it in a place, and adds a beat to it. The way music is integrated, not just in the songs you ought to be paying attention to but the score and the filler; she gives Mumbai a beat, and suddenly I’m drawing comparisons in my head to the streets of New Orleans and Philadelphia, music towns, places that have a beat in my head. Obviously it has a lot to do with the nature of the film she was making, but I’ve never been made to see Mumbai like that, and that’s a job exceptionally well done.

In the end, film is about communicating something. All of the above indicates artistry, skill, and technique, but it all serves little purpose if the film doesn’t have a direction and something to say. Luckily, we didn’t have to worry about that here, though the communication doesn’t stop there, and there are certain worries I have about the way something like this film is consumed in the environment it’s consumed in. The film says important things, things about the nature of respect, things about class divides, things about talent and ambition and the right kinds of friends. These are messages we all sorely need right now, more, perhaps, than ever, and what better weapon to deliver those messages than hip-hop and rap music. But this medium has the tendency to act as a double edged sword in this case. The flash and bang that the film wields through the form of the music and the situation allow for a scope to outshine a lot of the important content of the film, not as a result of miscommunication on the filmmakers’ part but on the part of the audience. The film says important things, the main takeaway from it can’t be a bluntly rebellious attitude and that raps can happen in Bollywood too. I’ve noticed examples, both in the way that people react to the film and in the way that the film is portrayed oftentimes, that suggest to me that majority of the messages of the film might have been overlooked in favour of the flash and bang that comes with them, and that ought to be avoided at all costs.

One way or another, however, this is a fabulous film. My hat is tipped to the entire team, from a stellar ensemble to the brains behind the camera, for making not only a high quality film, but for treating some important ideas with the respect they deserve.