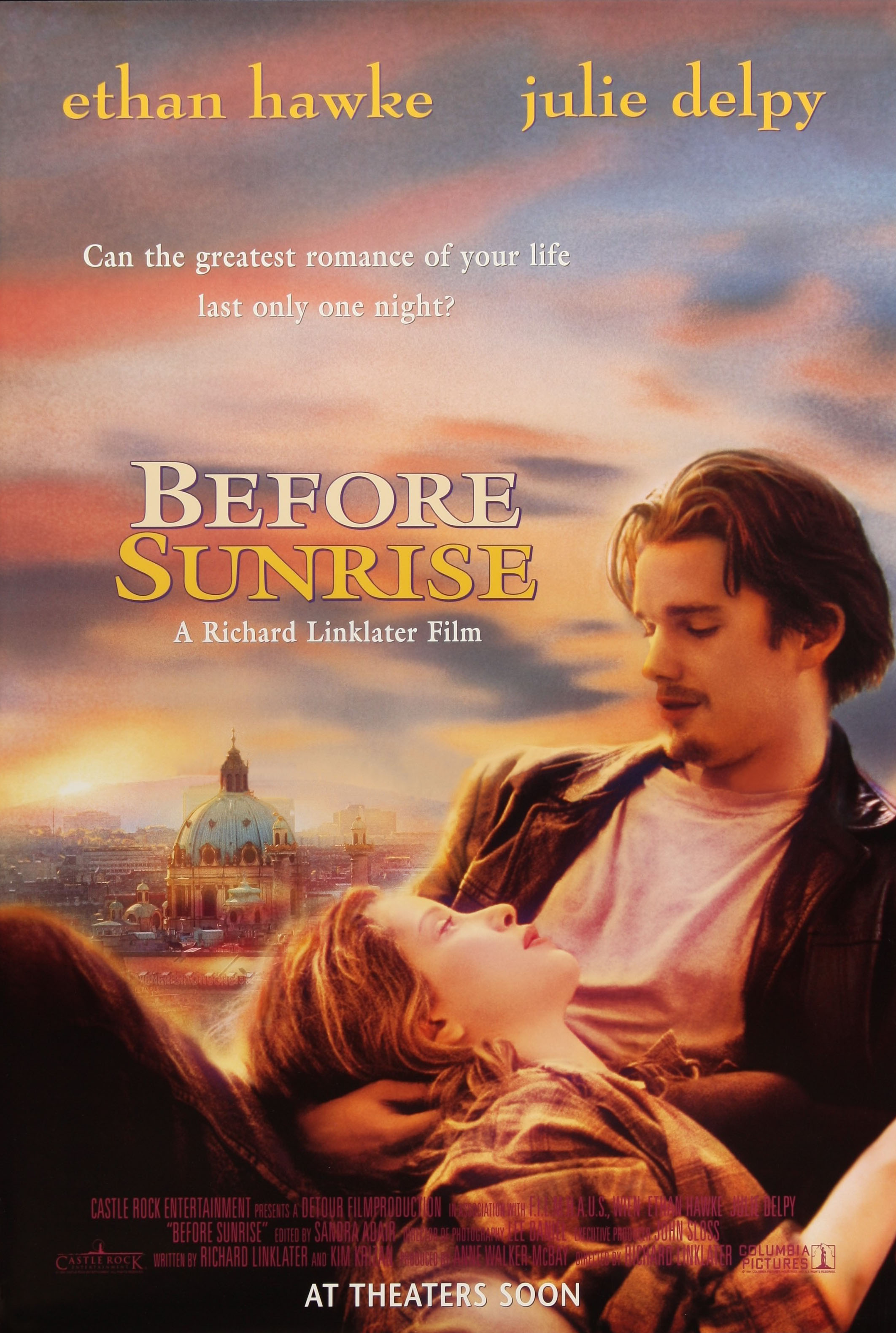 Hugely popular in the 90s, Before Sunrise is a romance/drama telling the story of a couple who meet one morning on a train in Europe and go on to spend one day and night together, knowing that that day and night might be the only one they have together. Their time together takes them all over the city of Vienna, as they discuss their lives, the world, and their places in it. Starring Ethan Hawke and Julie Delpy and directed by Richard Linklater, the film received warm critical response and a massive popular response, making it one of the most beloved romance film of all time.

I was very unsure of what to expect going into this one. Somehow I had never heard of it when a friend recommended it to me, but one mention to my parents told me all I needed to know of its popularity. And so I sat down to watch it, my interest peaked and my expectations measured. What I witnessed was a thoroughly unique and delightfully performed piece of film that managed to provoke thought and entertain at the same time, a balance not many films find easily. From an actor’s perspective, there was something stylistically mesmerising about the film. Firstly, Hawke and Delpy are fabulous, fabulous actors who really bleed into their characters, but they’re helped in that respect by an approach to storytelling that’s always fascinated me: Mandated improvisation. The idea of mandated improvisation, or point A point B point C acting as I’ve heard it referred to, is a way of performing a scene where an actor is given certain points that they have to reach, for example you have to say a certain line or you have to mention xyz things, and told to improvise how you get there. It’s a very honest, very truthful, and also a very risky style. Not everyone can improvise interestingly, and it doesn’t work if actors don’t have a certain kind of chemistry. That was not a problem here, as Hawke and Delpy stroll casually through five-six minute shots maintaining a flow of conversation so natural that it just can’t be scripted. That honesty adds up to them essentially playing versions of themselves on screen.  They’ve made exceptional use of mandated improvisation, and, as an actor, it was mind-blowing to see how much faith the director has in his actors and how they’ve delivered on it. It’s not an easy thing to do, but Hawke and Delpy’s unspeakably endearing chemistry (a certain scene in the listening booth of a record store comes to mind especially), as well as being deeply likeable characters on their own, gives them the key to an absolutely shocking double performance.

The moment you look at the content of the film, however, the riskiness of the style becomes easily justified: there was just no way they could have pulled it off otherwise. One way to describe the film, as a friend did, is a prolonged discussion, and that’s essentially all the film is. Jesse and Céline’s relationship is as ideological as it is romantic; they spend the vast majority of the film walking around and talking about life. From relationships to parents, from childhood to ageing, and from memory to death to name just a few of the many areas of conversation covered in this film, Jesse and Céline share deep and oftentimes contrasting views on the world and its problems. That’s another thing that makes this film unique. I mentioned it earlier, but few films have ability to commit an audience to a romantic relationship as well as raise so many ideas at the same time. It’s a fascinating discussion, and there are more than a few dialogue-shaped gems there to shake your head in amazement at. Watch the film with family or friends (or both) and the urge to pause and discuss what was just said might overcome you. I’d strongly advocate succumbing to that particular urge.

If you can’t tolerate sap, this film isn’t for you. I happen to be made of sap, it might be more accurate to say that sap tolerates me most of the time, so I didn’t have a problem with it at all. In the area of cheesiness, there are a few moments when the writing and/or improv is stale, but not nearly to the point that it’s unforgivable. The scene on the train platform annoyed me slightly. It felt out of character for the two of them not to be able to follow through on their vow, though the promise of a sequel wasn’t exactly met with disappointment. The fact they couldn’t go through with it in the end made me feel a little betrayed, it ended up being all talk and no walk. Not that the struggle wasn’t real, it was a powerful enough scene anyway, but the direction it went in was kind of anticlimactic. The moment of parting was so built up to and so dreaded, that the ultimate promise to meet again felt kind of cheap. Again, I don’t want to play this up. All I’m saying is that it would’ve felt more compelling to me if the magic really was contained in this one moment.

I loved this film. I really did. It was almost liberating to watch these 24 hours of two people’s lives unfold, giving voice to your least expressed thoughts and making you laugh at the same time. I haven’t described it in the intro as a comedy because the intros are meant to be a little more objective and the IMDb page doesn’t list it as one, but it’s a very funny film; not always in conventional ways but you laugh nonetheless. I’m yet to see the sequel films, there are two more. My understanding has generally been, from the reading that I’ve done, that the trend only goes up, and I’m very excited at the prospect of diving into these wild spirits of characters again. Before Sunrise is a film superbly performed, appropriately conceived, and even more appropriately consumed, and I’d recommend it to anyone and everyone (with the exception of the sap warning) for a time both light and powerful in inexplicably equal measures.