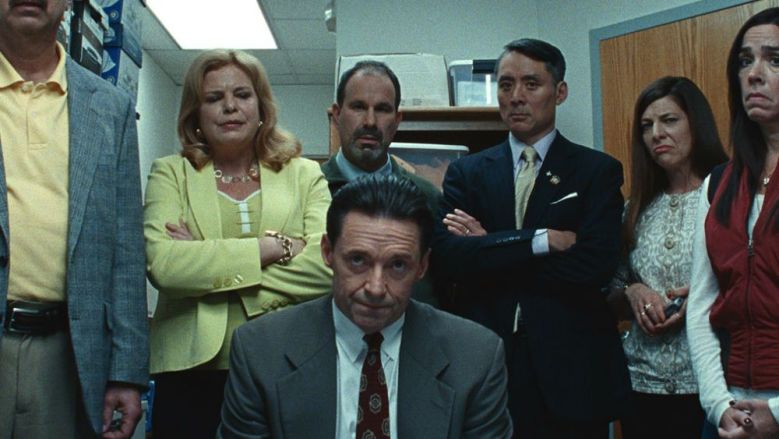 One of the most anticipated films of the last few months dropped as per schedule on HBO and HBO carriers today in the form of Bad Education. The film tells the true story of the most extensive school district embezzlement in American History, orchestrated by the then superintendent named Frank Tassone. The film stars Hugh Jackman as the lead, in what critics are labelling the best performance of his career. The film also stars Allisson Janney, Ray Romano, and Alex Wolff, directed by Cory Finley, and written by Mike Makowsky.

I’d been looking forward to this film since I saw the trailer a few months ago. I’m a huge Hugh Jackman fan, and I’ll watch anything that Allisson Janney’s in, and, with absolutely nothing else to do, I sat patiently and waited for the release of Bad Education on Disney + Hotstar, which carries all HBO content in India. My anticipation came good and then some. Bad Education is the best film of 2020 so far. Everyone’s pulled their weight on this one; Jackman’s performance is inarguably the best of his career (we’ll get back to that in a bit), the writing is sublime, and the visual composition is brilliant.

Supporting characters are underlined by nearly universally superb performances from supporting actors. But the two main attractions are obvious here; Allisson Janney could just be in line for a second Oscar for a supporting role, delivering a venomous, frightening performance as Pam Gluckin. She brought this very subtle, very aware evil to her role, helped enormously by the writing which I’ll cover in a minute. But first we have to address Hugh Jackman, whose performance was just incredible. Aaron Sorkin, who is, in my opinion, the greatest writer of all time, talks about the way he wrote anti-heroes. He describes his method to writing such characters with objectively dishonourable characteristics as having them plead their case to God as to why they should be let into heaven. Jackman and Mike Makowsky, the film’s writer, have teamed up to do just that, in a beautifully empathetic performance of a man who did, in fact, steal some 2 million dollars in taxpayer money from a Long Island school district. The whole first half of the film is spent building up the likability of the man, exploiting Jackman’s face-value personability and adding to it a characterisation campaign that makes you tremble with fear at the idea that he might’ve been involved in Pam’s theft, then spending the rest of the film justifying his actions within a certain reason. Before anyone jumps up and down, I don’t think it falls into the ‘glorification’ category that people are plenty fond of dumping things in these days. It’s part of what made this film so interesting, part of you knows that Frank’s been hard-done by this whole situation. There are two scenes in particular that come to mind, one with Jackman and Romano on the school bleachers, and one of Jackman and the parent of a struggling child in his office. The two scenes are almost one-after-the-other, and they both make the same point. It highlights the way we, students and parents both, exploit the teacher relationship as a means to an end, a transaction that doesn’t tend to be all that meaningful for us but plenty meaningful for them. Frank’s point is that he had, in his capacity as a teacher and superintendent, done an incredible job, elevating the school district to its place among the best public schools in America, with some of the best college acceptances. That quality did a lot for the student’s futures, and made some real-estate moguls rich, and he did it all on a teacher’s salary. He’s shown throughout the film to take an interest in the quality of his institution way above what many would call the call of the job, his argument is that he’s not been treated fairly and I hear it. If it hadn’t been for the extent to which he’d acted on that argument, I’d maybe be on his side, but embezzling 2 million dollars takes his argument too far. Still, Jackman squeezes every iota of feeling out of the dedication his character shows his students and his job, making for a frustrating likability right alongside a sinister undertone.

A lot of the genius of this film comes out from the writing. There is some really impressive not-so-subtlety to the syntax of this movie. Something about the way the words work themselves, amplified tenfold by performances like Janney’s and Jackman’s, which maintain this weirdly diabolical tension the whole way through the film. It’s engrossing, but, that aside, the way the plot moves forward is really interesting. They sell Frank hard early on, but the way his story intertwines with the Rachel’s (played by Geraldine Viswanathan) investigation is good, and the way her father’s situation mirrors what’s happening at Roslyn is a good detail that gives me an explanation behind every motivation and every action. They really work hard to cover all their bases, and they do it convincingly. I’d emphasize again how well Frank is characterised throughout the film, it’s a fascinating portrait they’ve painted and I’m left to wonder the extent to which it’s faithful to reality. I should mention that I haven’t had a chance to do anything resembling in-depth research into the source material; I’m not in a position to comment on historical accuracy. I am, however, in a position to comment on the quality of the storytelling and how they’ve presented their version of history on screen, and they’ve done it marvellously. Frank’s character is the best possible example of that, irresistibly personable and genuinely caring on one side and sinister on the other. Makowsky is also an interesting perspective on it all. Aside from the superb job he’s done on screenplay, he was actually a student at the Roslyn middle school when Tassone was arrested.

Every part of this film fires on all cylinders. I don’t have any trouble saying it’s among the most consistently rounded films I’ve seen in a long while, a testament to phenomenal writing, acting, and visualization. I was expecting an interesting plot, I don’t know that I was expecting as much emotional depth as I saw, or the fascinating character that Frank Tassone turned out to be. I just have nothing bad to say about it. This was a fantastic film, easily the best of 2020 (though there hasn’t been much in 2020), and arguably one of the best new releases in quite some time. With any luck it’ll get its due, which I expect to be Oscars in Best Film, Screenplay, Performance in a Supporting Role for a terrifying Allisson Janney, and Performance in a Lead Role for a frustratingly complex Hugh Jackman.

Edit: Tragically, since the film was made for television by HBO, it actually isn’t eligible for any academy awards during any cycle. It won’t likely have a theatrical release. That puts this film squarely in the Film made for Television category at the Emmys, which it’s absolutely sure to sweep.