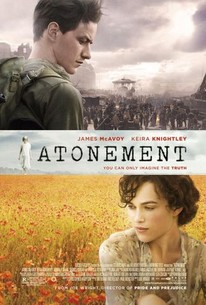 Atonement, starring the illustrious pair of James McAvoy and Kiera Knightly, makes for one of the most interesting period narratives told in this generations. The film follows a couple, torn apart by misunderstood circumstance, who maintain their love over a war, sustained by a dream. The film is really about the journey of a young girl, played at first by Saorise Ronan, a girl close to the two main characters, who plays a great role in the relationship of the main couple, although not necessarily one she might have expected. Her guilt is explored, as the film tackles the idea of accountability, innocence, and Atonement. The film was nominated for seven Oscars, winning one.

Few on-screen pairings have excited me quite like Kiera Knightly and James McAvoy. Two incredible actors, whose work I admire to no end and have the utmost respect for, deliver one of the best joint performances I’ve seen, in roles that just had to be written for them. Seriously, these are two talented people, and the sympathy for their characters is rooted so much deeper by a wonderful screenplay that pushes the boundaries of narrative deception. Well written dialogues aside, there’s an obvious tact from a storytelling perspective. It takes the form of an interesting twist (sort of) at the end, which I won’t go into detail about here. Character work is excellent, although I would have liked to have seen more development for Benedict Cumberbatch’s character (by the way, this film, best one that Ben Cumberbatch has ever been in). The twist regarding his character can be seen a mile away, which I don’t necessarily have a problem with per se, but I’d have liked to have had more concrete material to hold against him. He ends up becoming something of a faceless subplot to the whole tragic misunderstanding bit, which is fine, the misunderstanding and the love story is the point, but it wouldn’t have hurt to add another five minutes to the film to make his antagonism more concrete.

Speaking of the tragic misunderstanding, I have to make a confession. The first twenty-thirty minutes of the film, during which the terribly unfortunate series of events resulting in a crime being misreported, were absolutely hilarious. It was tragic, don’t get me wrong, and I probably would’ve been very disturbed if it wasn’t kind of hilarious how the whole thing starts. The inherent funniness of it goes away fast though, and the remainder of the film gets really quite somber. Some of the technical work is masterful; well drawn follow shots and pretty compelling landscape shots during the World War scenes. The most notable of these was without question a 5 and a half minute tracking shot on the beach at Dunkirk. While these don’t have a direct correlation to how interesting the story is, it’s telling of the high quality job that reputed director Joe Wright brought to the project.

The really striking thing about the film, however, has to be the character of the girl. Briony Tallis, the 13-year-old girl, appears a side-plot throughout the film in terms of her growth as a character and her personal struggle as she wrestles with the guilt of her actions. In reality, it is her character who brings about the theme of forgiveness, a lack thereof, and the consequential Atonement. Though it takes time, Briony takes her place as the main character of the film. It’s easy to forget in the face of such compelling romance and writing that it’s all means to an end, and it just so happens that this end can even mean dissatisfaction for an audience. I won’t pretend that the end of the film, while masterfully written and executed, wasn’t a little bit disappointing to me, but I suspect that may simply have been a coping mechanism for what really was heartbreak; heartbreak for these exceptional characters. The film explores these themes and questions of attempted redemption, and the role storytelling can play on our conscience, in a way that is nuanced, and, quite frankly, has never been done before, and center to it is the character of Briony Tallis, the girl that sought redemption but instead received Atonement. A more apt title for a film you till never see.

There are a couple important things I haven’t mentioned. Firstly, the wonderful screenplay is, in fact, an adapted screenplay from a novel written by Ian McEwan of the same title. Joe Wright and his team’s accomplishments in writing therefore, while nonetheless exceptional, should also be accredited to him. Furthermore, the Oscar that the film did win was for Original Score, which, suffice it to say, is magnificent. This film deserves, in my opinion, the highest acclaim available to film. It’s nuanced, emotional approach to an incredibly compelling love story and its combination with an over-arching theme is nothing short of incredible, an achievement in filmmaking, and I do hope it is regarded as such. It is rare to find such potency in a film in general, much less an adaptation of a novel, and for that I tip my hat to all those involved.