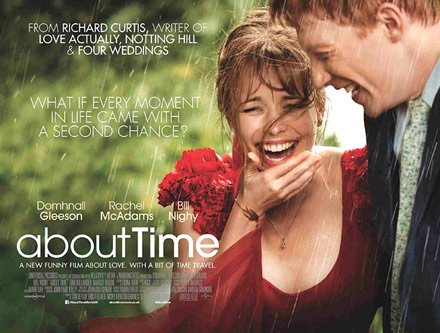 From the creator of Love Actually and Notting Hill, Richard Curtis, About Time is a film about a young man who discovers his ability to travel back to moments in his own life to do them differently. Far from a sci-fi, however, it turns into a heart-warming, life-affirming quest for love and happiness. The film stars Domhnall Gleeson, Rachel McAdams, Bill Nighy, Margot Robbie, Lydia Wilson, Vanessa Kirby, and Tom Hollander among others. As mentioned, the film is written and directed by Richard Curtis, whose previous works include Love Actually, Notting Hill, and Four Weddings and a Funeral.

I love this movie, very dearly. It got off to a really rocky start, injecting a tonal-ly inappropriate premise that belongs in a film of a slightly different genre, then goes on to trivialise it. Hard. The first scene where Bill Nighy sits Domhnall down and drops the small atomic bomb of “men-in-the-family-can-time-travel-by-the-way” is comically out of place, and for Domhnall’s character’s first and only wish as far as exploiting this new and generally unexplained power to be to “get a girlfriend” is really very strange. All in all, fifteen or so minutes in, and you’re looking at your watch.

But them something extraordinary happens. The hike in quality and consistency isn’t sudden. It’s a gradual climb, right up until the end, at which point the lacklustre opening salvo has grown into a beautiful, calmly emotional, and intensely bitter-sweet life lesson which you wish could never end. If I had to put a pin on a turning point, it would be Rachel McAdams’ introduction to the story. The chemistry between her and Gleeson is perfect, picture perfect, making for a genuinely exhilarating will-they-won’t-they via his time travel antics. But then it works out, and that’s when the film catapults into a realm that I don’t know many rom-coms to have done before. It’s not necessarily the norm to see a film like this have narrative legs after the couple gets together. Rom-come tend to be about a relationship coming together in a dramatic way, and, when that happens, there isn’t much more story left to tell. About Time smashes that formula to smithereens, aiming to be about something much larger and more substantive than a typical film of its kind. The time travel element of it becomes incidental, a tool that’s used to present its characters and its audience with challenging questions and circumstances, forcing choice and prioritization of different kinds of love. The whole way through, you find yourself absolutely terrified that he’s going to make some horrible time travel mistake and ruin everything, but it never really happens. Instead, Gleeson’s character is presented with more…pensive challenges. He’s asked about what this power he has can mean for his happiness, what things he’s willing to change, aware of the cost, and how he inevitably has to prioritize the things that are precious to him in his life. It’s an incredible spin on a slightly tired idea, no one will be drawing continuity diagrams for this film.

And the ideologies and conclusions that are arrived at over the course of dealing with those challenges are beautiful. In a lot of ways, this film is an unacademic philosophy lecture about happiness and balance. It’s propagative of an idea, one of living wholly and positively, with an understanding of what is good and bad in the world, and it comes across so extremely well. Credit has to go to Curtis. This has, I believe, replaced Notting Hill as my favourite of his works. It actually much the same job that was done by Love Actually, but in a much less goofy, altogether more potent way, the show version of that film’s tell. I should also applaud the fabulous work done by Domhnall Gleeson and Bill Nighy, who illustrate one of the most wonderful father-son relationships I’ve ever seen on screen, as well as Rachel McAdams, whose chemistry with Gleeson, as I mentioned, is astounding, completely selling their romance. The mark of a really good collective performance, however, is the quality of a supporting cast, and the likes of Tom Hollander, Margot Robbie, and Lydia Wilson have absolutely outdone themselves.

I was completely taken aback by this film. I went into it expecting another rom-com, something fun, but nothing I hadn’t seen before. My expectations haven’t been that off in quite some time. After an undeniably weird first 15 minutes or so, which cannot be discounted, About Time grows into itself in a big way. There remain some slightly problematic inconsistencies as far as the time traveling goes, but, as I said, it really couldn’t matter less. It’s not what the film is about. This is a film about much larger things, and I for one was thoroughly impressed with the deftness and sensitivity that Curtis and Co. have employed to bring out a message that I think many of us could really do to hear right about now. This is a beautiful film, that I’d strongly recommend you watch.