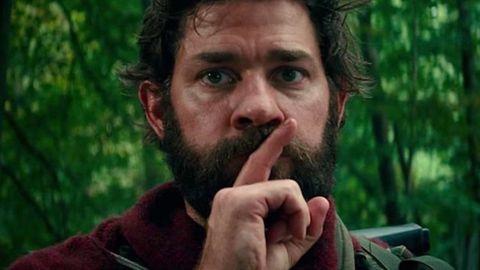 Who would’ve thought. Who in hell would’ve guessed that Jim from The Office was actually some kind of genius. Last April saw the release of A Quiet Place; an eerie, soft thriller written and directed from Office alum John Krasinski. The film is set in a dystopian future, otherwise known as 2020. In this reality, the Earth has been taken over by blind monsters, monsters that move to instantly kill anything that makes a sound. It’s a terrifying idea, and the film follows a family’s ordeal of survival in the face of the situation. The film stars Krasinksi, who plays the father of a family of five, as well as his real-life spouse, Emily Blunt, playing his wife in the film.

Let’s get the characters out of the way. How is it possible that the characters could possibly have been so well rounded, so well drawn, with such a level of depth, in a film where the total number of dialogues actually equals ninety? Ninety lines of dialogue! How is it possible? I really don’t know, but one way or another it happened. The most impressive part of acting happens when you have to convey without speaking, and John Krasinski was incredible as the father, who’s name, as we find out only in the credits, is Lee Abbott. He really commands an audience’s sympathy as he tries desperately to deal with his oldest daughter’s deafness, in a situation where making a sound can and will result in death. Emily Blunt deserves similar recognition, with her most notable moment being a scene in which she actually has to give birth without making a sound. The giant hairy and claw-clad sound monster right above her probably served as enough motivation. I have to say that there is a character in the film who I hate with all my guts, who would be the daughter. I don’t know if this would be a credit to Millicent Simmons, the girl who plays that character, or just a credit to the writers, but that character is probably the reason most of the terrible things that happen to the family during the film. It causes downright emotional pain to see that girl flash her defiance and teenage need to not comply in life and death situations, and blame her father for things that are quite obviously a result of her unabashed stupidity. It’s an emotional roller coaster ride in that way, and that’s obviously what the writers intended. But still, it managed to really get on my nerves.

The real genius behind Krasinski, because it wasn’t obvious enough after the writing of the film and his performance, came out in the way the film as shot and directed. A lack of dialogue does not always mean silence, and a combination of close up pans and unbelievably good musical choices, coupled with regular sound cuts where I could hear the guy in the front row chew his popcorn, made for some of the most intensely dramatic and suspenseful scenes I’ve ever seen. Such an incredible use of physical contrast, even the simple things like fast to slow drops or loud to soft, had the greatest impact in context, and I for one was hanging by my fingers from the edge of my seat. What an incredibly well directed film.

There’s not a lot I can say about this one that would take in overboard. It was so unique, so authentic in it’s voice, and just downright quality. If I would change a thing, it’d be the end, I felt a little dissatisfied by the last scene, or rather that the film ended where it did. I haven’t gone into too much details about what actually happens in the film, few crimes are more heinous than spoiling a good story, but trust me when I say there are enough heart-wrenchers and intense scenes to make anyone care, and it happens to have the advantage of being well written, which is just unbelievable seeing as there wasn’t much to write. Overall, an excellent film and a must-watch.