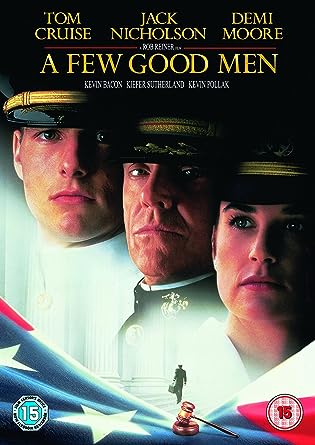 The world got a little bit, okay a lot, brighter in 1992 when the first motion picture released by the one and only Aaron Sorkin took the form of A Few Good Men, starring Tom Cruise and Jack Nicholson. The film conforms loosely to a courtroom drama, with about a third of the film taking place in and around. The story follows a talented young government lawyer, played by Cruise, who is assigned to cover a case involving infighting. The case appears mundane at first, but reactions to the news of the case suggests that the case has more to it than meets the eye. The film deeply explores the concept of honor in the context of the law, military, and human conduct.

Let me get this out of the way, although this won’t be the first time you read this on this website. I am of the opinion that Aaron Sorkin is the greatest writer of all time. Okay I’m done. No. No I’m not. Aaron Sorkin is a writing god who, I genuinely believe that if more people watched his shows and films, the world would be a better place, and this is a belief I cannot express even from the deepest depths of my heart. The man is a romanticist, his writing conveys his ideal world, a way the world should work. I’ll go more into him in another piece, maybe I’ll do a piece entirely on him and his complete works. One way or another you have not heard the last of Aaron Sorkin from me.

Needless to say the writing is sensational. It’s unseasoned from Sorkin to be sure, it being his very first film and whatnot. That said, the man was a genius even then. The depth and subtle relatability he gives his characters is exceptional, and the arc he takes them on forces a commitment like few films ever manage to do. The plotline in of itself is excellent, really engaging and never letting up for a second. If I’d critique the writing at all, and I do so only to avoid the suspicion of bias (though I suspect that ship sailed), would be pacing. Sorkin’s signature style involves, snappy, sweeping dialogues that require intense concentration from an audience to fully comprehend. Sorkin has thrived on the small screen for precisely that purpose, shows having the longevity that gives an audience the time to acclimatize to the very unique style. In a film, however, that longevity is not available, and it often results in pacing inconsistencies as a balance is looked for. It’s slight, but the pacing problem does exist.

I’d be amiss if I didn’t commend the exceptional team that, you know, made the film. Rob Reiner, who went on to be a longtime collaborator of Sorkin’s (Reiner is another maker of exceptional films) has done a phenomenal job on this film, working particularly well with the close shots and actor’s guide during the whole film, and two scenes that specifically come to mind; both of which would have to be on a list of my favorite scenes of all time. Nicholson is a master of the craft, no news there, but Mission Impossible fans might be shocked to find their star is capable of top quality acting, for which he was recognized by the academy. Demi Moore, already an established actress at the time, did magnificently well in the role of Cruise’s administrative assistant, who becomes heavily involved in the case.

Aaron Sorkin aside, although he happens to be a principal proprietor of this particular brand of entertainment, the film revolves around an idea. All the wit and intelligence worked into the screenplay aside, and all the exceptional direction, cinematography, and performances aside. Nothing is more important, now more than ever, than honor. Nothing is more important, and never has it been more important, that the world is ruled by discussions, introspections, and actions that are made with the thought of integrity and honor close at hand, and I this film is about anything, it is about honor, integrity, and moral action even when it would be far, far easier to be apathetic. It’s about nothing more, and nothing less, than A Few Good Men. It has my strongest recommendation and I hope more people will, in more recent times, turn to Aaron Sorkin’s work on a regular basis, for entertainment as well as inspiration. I do believe the world would be a better place.