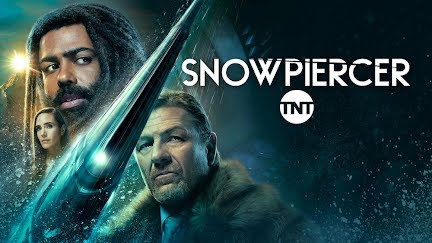 Mid May saw the release of the Snowpiercer television series: a series adaptation and reinvention of the concept originated by Bong Joon Ho’s 2012 film by the same name. Following the same premise as that film, Snowpiercer is set 7 years after the governments of the world attempt to halt global warming by releasing a freezing chemical into the atmosphere, leading worldwide temperatures to drop to well below inhabitable levels, freezing the world over. What remains of humanity is preserved on a train called Snowpiercer, a marvel of engineering that runs on perpetual energy. However, tensions rise as the class system takes its shape, and the resources of the train are skewed towards the upper class passengers, leaving the passengers in the rear of the train, “the tail”, with barely enough to survive. Revolution ensues, but is halted after a murder up-train forces the governing powers to enlist the help of the leader of the rebellion, a former homicide detective, in restoring order. The series stars Daveed Diggs, Jennifer Connelly, Mickey Summers, and Alison Wright among others. It is understood to be a completely different universe from that of Bong Joon Ho’s film.

My expectations for this series were quite high. I’m a big fan of the original film, which I’d strongly recommend to anyone who hasn’t seen it. It’s brilliant; an incredible narrative premise, and an utterly fascinating ideological commentary on class, impeccably made and brilliantly performed. Considering that level of quality in its source material, the Snowpiercer series had a lot to live up to.

Ultimately, I’d say it absolutely lived up to that expectation. The Snowpiercer series is a classic case a story that gets better as it goes along. I watched this as it aired weekly (still the best way to watch things, in my opinion), and, after the first few episodes, it seemed like they had chosen to settle for 70% of the depth and density of the film. As the series goes on, however, that number goes up, as longer plays for character arcs over the whole season start to come good and how. I’d still say the film is a better individual piece of art, it has an urgency and a kind of mystery about it that maintains a much higher level of exhilaration throughout, a level that the show doesn’t hit until the last episode. But it’s a trade-off, and in exchange for that urgency and mystery, we get the benefit of a much deeper and more thorough look into the very unique world of Snowpiercer, and, as a result, we come to understand a much more pensive, detailed version of the same ideas, those of the injustice of a capitalist system and the nature of human power systems, sacrifice, and even some ideas that the film never gets a chance to address, like the chaos of what happens after you win, and how difficult change really is.

I should expand a bit, and give more weight to the extent to which the urgency of the show does increase impressively over the season’s run. An issue I heard people express as the first few episodes were dropping was that it felt less like an adaptation of Snowpiercer and more like a sort of glorified cop show with a more interesting but ultimately incidental premise. That lasts the first couple episodes, maybe even the first half of the season, but I’d argue that that period of time is essential to laying the ground work for the principal characters. Andre Layton is a really, really interesting man character for the series, with just as much emotional complexity, and, after 10 hours, more likeability than Chris Evan’s lead ever had in the film. That likeability comes not only from the extra time on screen, but the work of Daveed Diggs, who is really fantastic in this show, really embodying the constant contradiction of an unadulterated desire for equality and justice. He’s likeable, emotionally complex, given his past in the tail, and really well performed off paper. I can’t think what more could possibly be asked for. As good, if not better as a character, is Melanie Cavill. Again, the acting chops of a really strong principal cast brings to life a deeply complicated character in Melanie. She represents the realism of trying to maintain humanity, a really interesting ideological blend with Layton, and has her own emotional depth to with it. Hers might be the most compelling character situation of any character in either the film or this series: she’s the literal unsung hero, fighting with every ounce of her wits to keep the train running and order, enough of it for the human race to be prolonged. It’s an almost neutral position, but from a place of real heart. The oxymoron writes itself, and that internal conflict makes her the best character on the show. But, as I’ve said many times, a really good film or show needs a supporting cast that pulls more than just their weight, and this show has them. Mickey Summers’ growth in the character of Bess Till is excellent, matched by the Folgers and LJ, the only actual villains in the show. Even Alison Wright’s character, Ruth, who annoyed the crap out of me for the vast majority of the show, more than serves her narrative purpose, presenting the necessary, however irritating, ideological aspect of Wilford’s deification. All of these characters are excellent, in the writing, dynamics, and performances.

But all of that would be a lot less meaningful if they didn’t add up to a narrative that does the premise justice, which it absolutely ends up doing. After spending most of the first half of the season playing cops and robbers and working to deliver justice to a murder, the narrative arc of the season turns to the meat of the idea of the Snowpiercer, the rebellion, and the survival. The regularity of high-stakes, life and death level suspense suddenly spikes hard, and the characters that the show spends so long setting up for you start being put in situations that do justice to the point of this premise. The show becomes about rebellion for Layton and the tail, about the burden of carrying human survival on her back for Melanie and the engineers, and about seizing power for the Folgers and first. That’s no longer the slightly thin whodunnit of the first half, that’s narrative content worthy of Snowpiercer.

Not only are the suspense and stakes that much higher, they maintain the mystery. Having seen the film, I had the sense that I could predict at least some of what was to come. As the last two episodes came and went, I realized how wrong I was. The last two episodes of this show are what justify it as an entirely different storyline from the film, a different universe from the film. I want to try to keep this from being a spoiler review, so I won’t go into too much detail, but the last two episodes go in a direction that having seen the film doesn’t really prepare you for. There are things you know, things you can guess based on the film that remain true, but the last two episodes, especially the last half of the last episode, do something to expand the universe of Snowpiercer in a way I certainly didn’t predict, and make me so excited to see where they’ll take this extremely exciting narrative line in the next season.

All in all, I was very pleased with the first season of Snowpiercer. After reading about production roadblocks and stalling, I was somewhat trepidatious, and, even after the first few episodes had dropped, I was resigned to the expectation that they were settling for less with this series. I was wrong, they turned it around, and what started out only ‘half-decent’ grows into itself in a big way. The film is probably a better standalone piece of art, if only because of that urgency that I mentioned before, but they do a decent job of mimicking that urgency in the last few episodes, as well as putting forward a fascinating, deep look into the nuances of one of the most interesting fiction premises out there. The first season of Snowpiercer is worthy of the lofty reputation of its source material, and I for one am extremely excited for its second season.