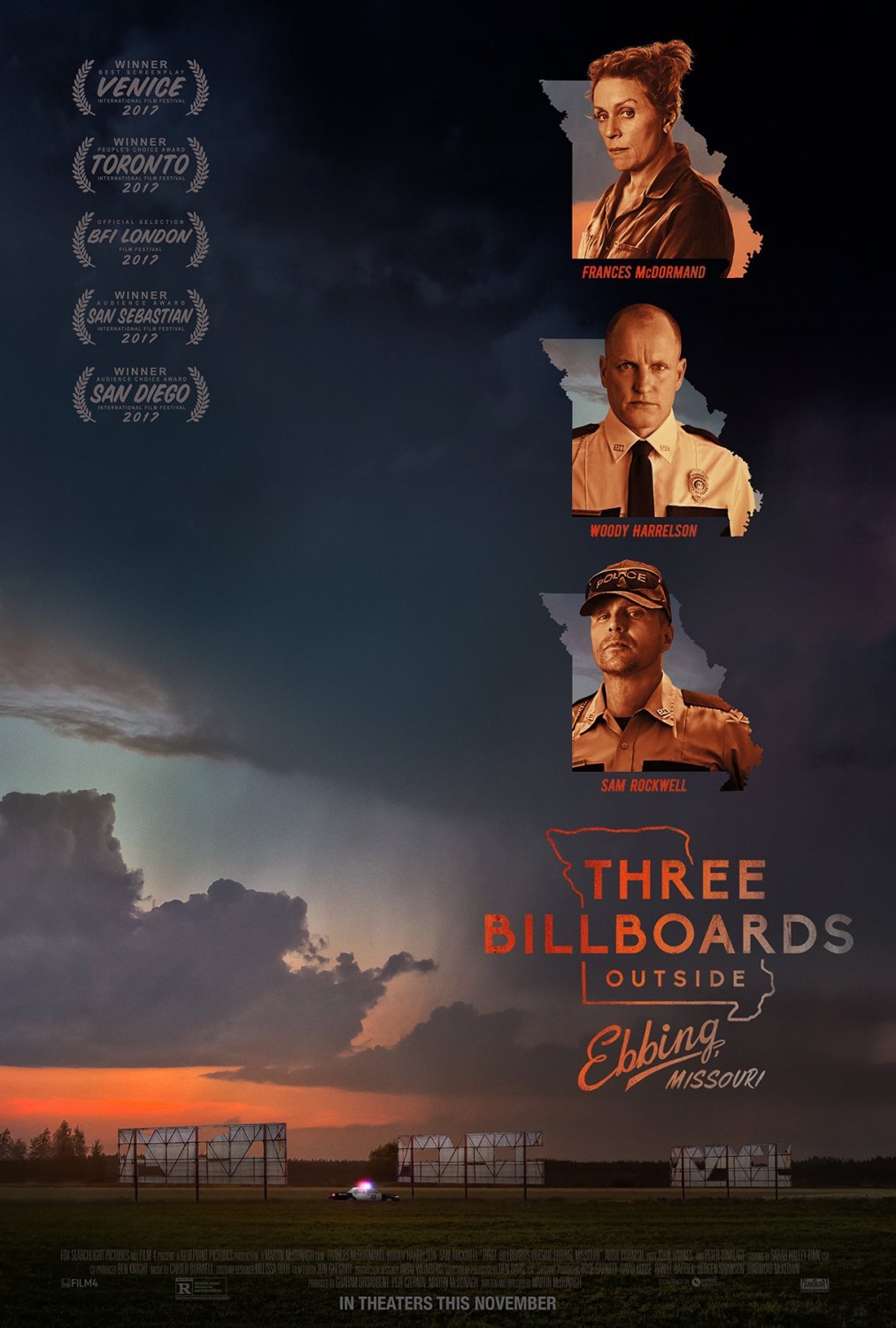 Among the most critically acclaimed films of the last few years is Three Billboards Outside Ebbing, Missouri, which was released in 2017 to rampant Awards season buzz and general acclaim, which went on to become two acting Oscars and a host of other critical accolades. The film is loosely based on a true story, and centres around a mother of a murder and rape victim, who’s frustration with the lack of arrests in her daughter’s case leads her to rent out three billboards just outside the town, demanding action, and implying incompetence. The film is written and directed by Martin McDonagh, a creator with a notorious comic style. It stars a laundry list of talent including Francis McDormand, Sam Rockwell, Woody Harrelson, Peter Dinklage, Lucas Hedges, and Caleb Landry Jones among others.

This was one of those films that I’d been intending to watch since I’d heard about it, but somehow only got around to just now. It seemed a strange combination to me: Martin McDonagh, whom I’d only experienced through In Bruges and Seven Psychopaths, two hilarious and pretty outwardly comedic films, doing a film whose plot didn’t seem very funny.

That strange mixture ended up being by far the most remarkable thing about a phenomenal film. The blend of heartbreak and comedy, and the intensity of those two tones, is a feat the likes of which I don’t think I’ve ever seen a film pull off before. Scenes spring to mind – Harrelson’s suicide, McDormand speaking to her slippers, Rockwell throwing a guy out of a window – which are crafted with such an expert and precise balance of funny and brokenness that it leaves you laughing and crying simultaneously, shocked with horror, but kind of amused at the same time. It’s a weird feeling, not unlike having your heart squeezed on both sides, but it makes for a really interesting dramatic experience and a whirlwind of emotions, coming and going at the same time.

But that melding of tones between comedy and dramatic could never have happened if the actors on screen hadn’t performed the absolute hell out of a strong text they’d been given, and Three Billboards hits home on both accounts. The writing is extremely good, if ever so slightly clunky in brief moments, and it maintains that level of quality in its broader strokes and its syntax together. The acting caliber, however, is of a shocking level. Francis McDormand does things that left my jaw on the floor, of which the scene I mentioned with the slippers is a perfect example. She was probably the best example of someone who managed to tie together the comedy and the tragedy, bringing the surface level funniness and the deep, profound sorrow of her situation all at the same time. Her Oscar for Best Actress could not have been more well-deserved. Sam Rockwell is another who does an incredible job, as well as the other who earned an Oscar for his efforts. He’s absurdly convincing as Dickson; the simple (to put it generously) and violent past, one of the few characters to undergo a proper and full character arc (more on that in a minute). Harrelson is as he always is, absurdly likeable and funny, with the emotional wherewithal to get where he needs to be for the more emotional scenes. In his wisdom, McDonagh’s given him a character that plays to those strengths, and he does the job extremely well. A great ensemble performance, however, is one where supporting cast steals scenes when that is what’s asked of them, and Lucas Hedges, Peter Dinklage, and Caleb Landry Jones are just some of a cast who do staggeringly well in this film.

And it is only through those exceptional, top drawer performances that the ideas of this film, and the tonal blend come across as potently as they do. It all helps to being across this helpless, greyness to the story: a situation where no one’s particularly right, and everyone’s at least a little bit wrong. Harrelson and his performance was the linchpin there. You felt, so deeply for McDormand and her loss, and you feel her guilt, and for the first fifteen minutes or so of the film the impression is one of moral righteousness on her part. But then Harrelson comes in, with his likability and personal circumstances, and now you’re rooting for two sides that look fundamentally opposed. One of my favorite scenes in the film was Harrelson’s voice over for his letter to McDormand’s character, which really exemplified both of their pain, and their mutual understanding of that pain in each other. It was profoundly melancholic, and that emotion ends up being the prevailing idea of this film. It bleeds through to the end, which is frustratingly dissatisfying and unfulfilling. And then, alongside this push and pull between McDormand and Harrelson, is Rockwell’s character, Dickson, the only character with a real arc, which comes good just as frustrating and heartbreaking a way as the rest of the film.

Three Billboards met and exceeded my expectations by some distance. It’s a fabulous film, extremely watchable visually with a pulsating comedic heartbeat over a blanket of tragedy that makes for an endless juxtaposition you simply cannot look away from. Add to that a coherent ideological angle, some really well weaved music, and a cast of actors who’ve left it all on the screen, and you’re looking at one among the best films of the last few years. You simply must give it a watch.