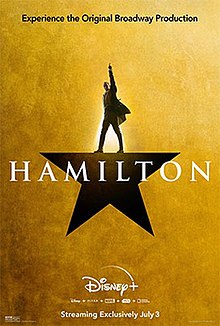 Regarded as one of the greatest plays of all time, Hamilton: An American Musical was recently brought to the screen by Disney Plus. The film, a recording of a stage performance by the Original Cast of Hamilton, was released just hours ago at time of writing. Hamilton is a musical about the first US Treasury Secretary: Alexander Hamilton. It plots the course of his life, and the impact he and other Founding Fathers had on the shaping of America as a nation, through its revolution and its institutional birth. It was written by Lin Manuel Miranda, who also stars in the show as the titular lead. He, along with Alex Lacamoire, wrote the music for the show, which also stars Daveed Diggs, Phillipa Soo, Renee Elise Goldsberry, Chris Jackson, Leslie Odom Jr., Okieriete Onaodowan, Anthony Ramos, Jasmine Cephas Jones, and Johnathan Groff among others. It is based on Ron Chernow’s biography: Alexander Hamilton.

I happen to have had the privilege of watching Hamilton live, in London. With that, and the fact that Hamilton is one of my favourite things in the known universe, in mind, it was in my head as the unfortunate reality that my watching of this film was cursed with comparison; that I would instinctively compare everything I saw to how it was live, and that its quality would be measured by how faithfully it renders the real thing. Incredibly, even had that been the case, I was not to be disappointed.

Hamilton the movie is spectacular. It captures a shocking amount of the live show’s energy for a recording, by way of some really cool camera work (not a hundred percent sure how they did some of it, gonna have to check that out later) and a quality of audio recording that, aside from just being clear, actually translates a surprising amount of the depth that exists in a theatre into the sound. While that does occasionally come at the expense of lyrical clarity – it’s obviously not as clear as the studio recordings – it does help keep a lot of the magic, which is an incredibly commendable thing. If you’re anything like me, however, and you already knew every word of the show before going into it, it’s a fantastic translation, both visually and musically.

Then we come to the actual show. I’ve never been shy about telling anyone who’ll listen that I think Hamilton is arguably the single greatest piece of art, period. Seriously, it’s The West Wing, and it’s Hamilton. The lyrical genius of this show is only matched by the musical ingenuity that was required to put it on stage. It is only that genius that was able to make Hamilton much more than a biographical recounting of just one man’s life. Hamilton is a story about the idea of America, the idea of revolution, of freedom, of responsibility, and of legacy. But those are just words, easy enough to say, but very rarely actualized in a way that’s particularly compelling. Hamilton makes those ideas feel real, using the life of Hamilton, the least talked about of the Founders, as a vessel through which to communicate those ideas. But it takes more than that, which is where we come to nitty-gritty of just how brilliant Lin Manuel’s lyrics are. A motif can be powerful because it reoccurs, and that reoccurrence gives it meaning. But words like “Death doesn’t discriminate”, “Dying is easy, young man. Living is harder”, “The room where it happened”, “History has its eyes on you”, and honestly close to every third line in this damn play contribute to an illustration of an unfathomably meaningful reflection on American history. Even fundamentally simpler bits, bits like “Wait for it”, so fully encapsulate a character like Burr, so fully encapsulate a point of view, that there’s just nothing one can do but lie back and watch, mouth ajar.

And it does it all while giving what really ought to be boring a dynamic, funny, and just generally contemporary feel. Hip-Hop really is the only way to make financial systems and cabinet meetings interesting, and Hamilton is exactly that. It’s a marvel, and for that credit goes to a large number of people. Its visual tone is extremely distinct, which is certainly part of what catches the eye about it. Add it’s choreography, which is genius in its own right (I’m thinking of songs like “Yorktown” and “Hurricane”), and some top notch performances, and we’re getting as close to perfect as it’s possible to get.

The performances really do deserve a mention of their own. Lin Manuel’s Hamilton is pretty much perfect, if for no other reason than this interpretation of his character really belongs to him by now. He’s not the best actor or the best singer on stage, but there’s something about his voice, the ownership he has over it all, that helps make him one of the best fits on stage (and it’s worth mentioning that Hamilton’s role is more acting to a beat than singing because Lin preferred it that way for himself). Then come the other absolute powerhouses. I want to say there’s a special mention to be given, but that would involve choosing some, and I can’t do that. Renee Elise Goldsberry is a goddamned…I don’t even know. She’s incredible. The same can be said for Phillipa Soo. I should say that the Eliza I saw on stage in London was damn good, but Phillipa Soo’s Eliza is jaw dropping, across every end of the emotional spectrum she brings to it. Daveed Diggs Has more charisma and presence in his legs than 10 good actors, and is arguably the best piece of casting with the double role. I also just want to say that there is only one Johnathan Groff, and he’s priceless.

Hamilton’s timeliness is extremely important. It’s a stressful time, “unprecedented”, as I’ve read in just a couple of places, and there’s an instinct to face the worst with defeatism and helplessness. Hamilton, aside from addressing some of the issues we see today, tangentially and otherwise, is about a greater spirit, one of fight and rising up. Now is the time to pay attention to the message of this piece of genius, and it’s exactly the right time for it to be made available to more people. So make the most of it. Watch it. There is almost nothing I’d recommend more.