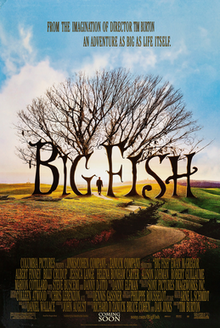 An odd ray of sunshine in Tim Burton’s body of work is Big Fish. Big Fish is the story of the relationship between a tall-tale telling father and his son. It revolves around the supposedly incredible life story of Edward Bloom, played by Ewan McGregor and Albert Finney across timelines, who, as a father, chose to spin fantastical stories about the events of his life. As his son, played in the film by Billy Crudup, grows older, he realizes his father’s stories couldn’t possibly be true, and tries to discern the reality of his father’s life from the magical nonsense of the stories he’d been told. The film is, as mentioned, directed by Tim Burton, an ever so slight deviation from his personal normal. It also stars Helena Bonham Carter, Marion Cotillard, Danny DeVito, and Jessica Lange among others.

This might not end up being the longest review I’ve ever written, there not being much in terms of volume to say about this film, but I’ve no doubt it’ll be up there with the most satisfying. I knew of this film only by reputation, as a generally upbeat Tim Burton movie, and as an extremely well regarded piece of children’s film. Any self-respecting piece of children’s entertainment can be appreciated equally, though in different ways, from the adult eye, and I, being a massive fan of the art-form of children’s entertainment, was pretty excited to see what it had to offer.

I was absolutely not disappointed. Big Fish is a delightful film, not nearly as silly as I’d heard of it, but maintaining a constant tone of playfulness that keeps an audience member smiling all throughout. It’s pretty hilarious, with a more brand of comedy that finds the middle ground between sophisticated and childish avenues, and it does that while furthering a weirdly engrossing storyline. It’s hard to avoid being unendingly charmed by Edward and his nonsense. After a point, you even start to feel a strange sense of familiarity with the places and characters of his stories, as they start to develop a pretty genuine continuity and an inter-relatedness that sells you completely on this crazy roller-coaster of a second life Edward has led

But what sets this film apart is the messaging. Big Fish is brimming with wisdom, subtle and otherwise, and, in both of the two stories it’s telling, the fiction and the reality, adding up to one big profound life lesson about getting too comfortable, acceptance, priority, and love. The way they weave themes into this film is wonderful, masked with meaningful symbols and metaphors, which left me completely in awe of the philosophical content of the film. On the flipside, in the realm of reality, there’s a really interesting comment about the way we tend to look at our lives, the positive, the negative, and the virtues and vices of truth. In that sense, Edward Bloom is a divisive character. While there are a lot of things about his behavior that inspires me, and makes me itch for the day that I get to tell stories to my kids, he definitely took it way too far. For the purposes of the film and all it says, however, I’ll take an extremist of a lead character.

It’s helpful, of course, to be technically strong. John August, the screenwriter who adapted the novel by Daniel Wallace, has done an incredible job. Performance-wise, I wouldn’t say there were any fireworks, though McGregor was plenty convincing, which was necessary to sell a character as distinct as the one he was tasked with playing, and he and Finney match up pretty well. Helena Bonham Carter, as well, should be applauded. The idea of her in a Tim Burton movie is an inherently frightening one, but she proved that she’s capable of playing more than creepy and deranged.

Ultimately, though, the magic of this movie comes from the ideas inherent to the story and the writing, for which I suppose the maximum amount of credit has to go to Daniel Wallace and the novel. I absolutely adored this film. It’s engaging, centers around a thoroughly interesting lead character, and leads you down a rabbit hole’s worth of interesting plot. I’d recommend it to anyone, for an enjoyable time, and more than a few pearls of wisdom. No film has it all, but this one has a lot.