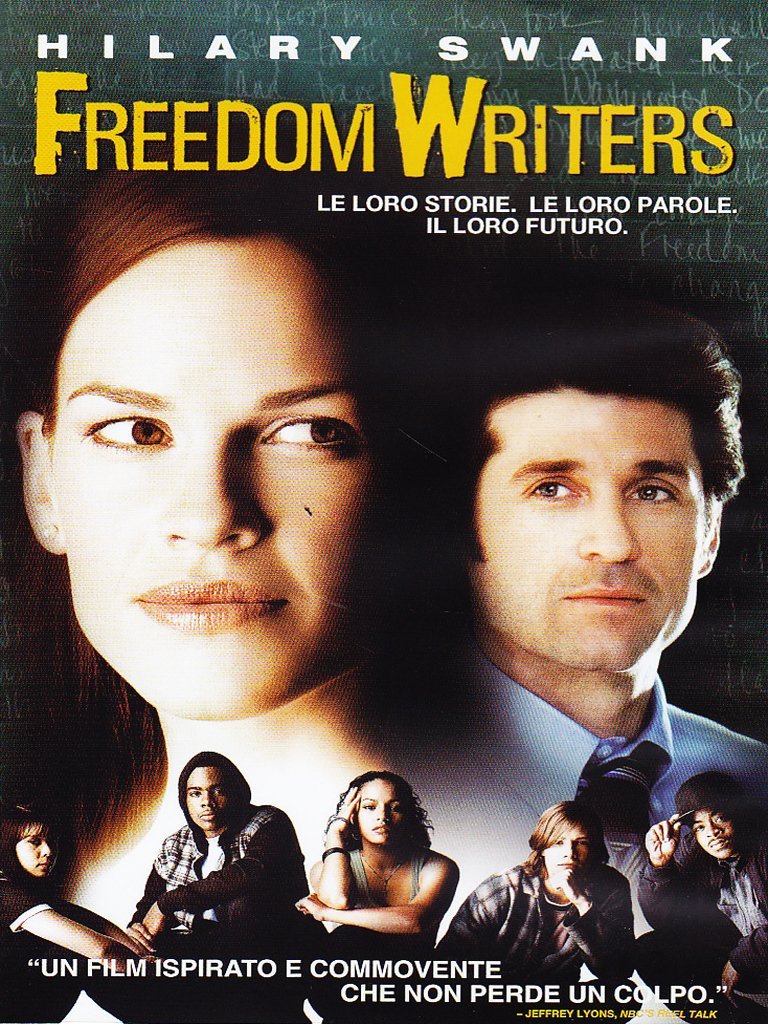 Freedom Writers is a film about the true story of a group of at-risk teenagers and their teacher, Erin Gruwell. It follows Gruwell’s relationship with these teenagers, from the beginning of their freshman year of high school, to near the end of their sophomore year. In that time, the classroom changes from an atmosphere of hostility and divisiveness, to one of respect and mutual acceptance. The film is based heavily in fact, portions of the film having been taken, verbatim, from diaries written by Ms. Gruwell’s students, who adopted the nickname “The Freedom Writers,” hence the name of the film. Ms Gruwell and many of her students now run The Freedom Writer’s Foundation. The film stars Hillary Swank as Erin Gruwell, Patrick Dempsey, Imelda Staunton, and a host of young actors, including April Hernandez Castillo, Mario, Jaclyn Ngan, Jason Finn, Deance Wyatt, and many more. It was written and directed by Richard LaGravenese.

This is a spectacular film. I didn’t know an awful lot about the film’s reputation before seeing it, but even still, I could kind of get a sense for what it’s essence was from reading a two-line description. Freedom Writers is an addition to what is starting to feel like a genre of film: the teacher-changes-his/her-students-lives-and-the-whay-they-choose-to-live-their-lives genre, which, when I think about it, actually has a much greater number of films in it than I realized. For that reason, the main criticism of the film that I’ve seen is predictability and formulaic structure, hence the extent to which could have the film “figured out” from a two sentence blurb on IMDb. But Freedom Writers rises above its formula. I think the amount of the film that’s based in fact is what sets it apart from the surface-level glance one could take at it. The story of Erin Gruwell and her resolve to change the world-views of her students is a deeply moving, affecting narrative, to which this film is a heartfelt homage.

I should start by tipping my hat to the quality of performance that is consistent in the film. Hillary Swank is pretty amazing, but the buck absolutely does not stop there. All of the actors who play children in her class, only a few of which are mentioned in this introduction, do a great job, and it is in large part due to their efforts that the oftentimes verbatim narratives of the students in the class are sold as authentically as they are. The fact that Imelda Staunton played Dolores Umbridge at the same time as this one (Order of the Phoenix came out in the same year) is awesome, and she’s maybe only slightly less effective here (only cause her performance as Umbridge is unimpeachable). Patrick Dempsey was good, but maybe slightly mismanaged. One of the few things that I felt wasn’t handled right was Erin’s marital issues. It wasn’t developed enough to get an audience to commit to it, but it was featured enough to frustrate me about that underdevelopment. They couldn’t seem to decide if it was a sideshow or not, which made me unsure about how I felt about its inclusion. While I’m on the topic of things that were mismanaged, I’ll say that some of the details that were left like there was some glossing over. Bits of it happened too fast, like how not even 30 seconds were dedicated to a whole food-market they set up to raise money to get Miep Gies in to talk to them. It emotionally paid off, and big time, which was decidedly the point, but they made some it seem maybe a touch easier than it probably actually was.

But the thing is, it was, actually. I wouldn’t ever claim to know everything there is to know about the true story, I’ve done a relatively rudimentary level of research, but from what I’ve been able to gather, this film holds quite tightly to facts, and even verbatim. All of the diary entries from the film were taken from actual diary entries written by Gruwell’s actual kids, which is what enhances the power that this film has. There’s a very honest, authentic tone about everything in this film, and it comes from the truth that it’s based on. A lot of the scenes and sequences, even some of the cornier ones like the toast for a change scene, all absolutely happened, and that truth behind the story is what makes it so affecting, even if the plot is what some might call typical. It’s kind of hard to pin something that’s true as typical, it actually happened.

And I love what it says. This film is a love letter to the power a teacher can have, and the way people’s lives can change if they’re treated with respect. In today’s world, where conflict is as ubiquitous as social media, is there a more appropriate idea? The ways in which we can reach people, and the effort that can be made to reach out to them? I was extremely moved by this film, and I think I would even go as far as to say that I have another addition to the conversation of my favourite films. It goes out on a limb, unafraid of naivety because, again, this actually happened, and the people involved have since started a foundation that has attempted to recreate it in as many classrooms as possible, and they’ve been doing it for over 20 years.

I really think as many people should see this film as possible, as a source of catharsis. If you’ve seen it and enjoyed it, I’d recommend a French film called Entre Les Murs, which is similar in its premise and it’s basis in reality. That one has a slightly more intellectual focus as compared to Freedom Writers. Freedom Writers, on the other hand, is a beautiful, heartfelt, and meaningful true story, emotionally affecting and uplifting in equal measure.