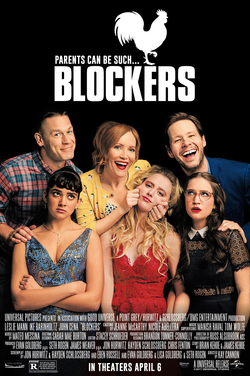 Honestly, I didn’t walk into this film with too many expectations. I thought it’d be another typically comedy with where parents try to interfere with their child’s sex life with weak punches and stereotypical jokes. But ‘Blockers’ definitely proved me wrong. I was surprised with a pure, light-hearted and genuinely happy movie that just makes you smile from start to end. The movie is filled with gags, amazing physical humour, pratfalls, and moments that will make you laugh, hold your head and go ‘Oh shit!’ and maybe even shed a tear, all while keeping a huge smile on your face.

The film revolves around 3 teenage girls (who’ve been best friends since the first day of school): Julie (Kathryn Newton), Kayla (Geraldine Viswanathan), and Sam (Gideon Adlon) who make a ‘sexpact’ i.e. to have sex with their partners on prom night. Julie has a longtime boyfriend, Austin (Graham Phillips). Kayla has no boyfriend and picks out her target seemingly at random from the cafeteria: Connor (Miles Robbins), the Chef, for his habit of cooking a wide variety of drugs into food and Sam picks out a nerdy boy Chad (Jimmy Bellinger), though she’s attracted to another – Angelica (Ramona Young). Their parents: Julie’s single mother Lisa (Leslie Mann), Kayla’s father (John Cena) and Sam’s biological father Hunter (Ike Barinholtz) set out on a beer-filled mission to stop them from completing this mission. The rest, you should really watch the movie and enjoy.

Director Kay Cannon (who wrote the ‘Pitch perfect’ movies) does well in her directorial debut by always maintaining an amiable and high-spirited feel throughout the film. She allows the actors a lot of room to cut modestly loose, which makes it an even more enjoyable watch. Yes, the movie is shot in Chicago that might as well be a studio lot, with attractive houses that is middle-class only to Hollywood but, honestly, it really doesn’t affect the rhythm of the film.

The screenplay writers, Brian Kehoe and Jim Kehoe, could surely have worked harder, for example, to find another excuse for the parents to find out about the plan rather than Julie leaving her laptop open, but those are only a few specific scenes that result in a riot of unfortunate beer-filled events, brilliant slapstick comedy and John Cena crying. The writers have definitely achieved their purpose: the film is not meant for the audience to use their brains while watching, it is meant to make the audience happy and that’s exactly what it did. The film had feel that is similar to when you watch a film by Jude Apatow. But instead of the children being the source of comedy on this journey of finding the emotional truth in erotic experiences, the film focuses more on the parents, who provide majority of the comic relief in the film.

The children don’t have many comic dialogues apart from Kayla and Connor, who has this distinct way of describing his drugs. Julie and Sara are both delightful, Chad plays his nerdy self until he starts singing and Austin is charming throughout the film. The performances of all 3 parents are the pillar over which the film stands. Hunter is a laughter riot, the eternal youth as he tries to fit in among the teenagers while Lisa, played with comedic willfulness, is the stereotypical mother whose character is built around her backstory – an ambitious college student, who got pregnant early, lives as a single mother and tries to prevent her daughter from following the same fate. Barinholtz and Mann play their roles wonderfully but the stand-out is definitely John Cena as Mitchell, the heft, built, disciplined athlete who tucks in his t-shirt and wears his phone pouch around his waist but is also a dewy-eyed sentimentalist who cries easily. Watching him in every scene was so much fun. Right from the first scene when the three parents drop their daughters for their first day of school and Mitch gets emotional. With his emotional and sweet side, he is also the centre of physical humour in this film.

All in all, ‘Blockers’ comes of as an undeniably pure film. The film is not meant to be good cinema; the whole point is to not think so much and simply enjoy the film. Of course it’s predictable and everyone knows what will happen in the end but it’s the journey that makes the film such an enjoyable watch. Kay, Brian and Jim have taken a common premise of an old farce that meets with new traditions and ideas and made it into something fresh and exciting. You may sit back and listen to a few stereotypical jokes but they’re choreographed in a way that make it much more enjoyable. Trust me, I entered thinking it’ll be another typical comedy that will try too hard to be funny but it turned out to be a movie which doesn’t try hard at all but will still guarantee a smile throughout – an absolute delight to watch.