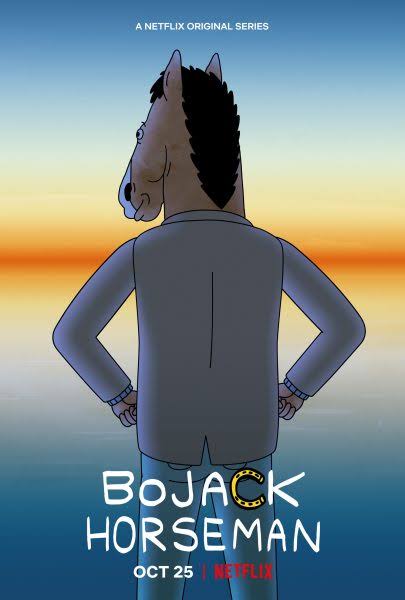 The second half of the conclusive sixth season to Netflix’s Bojack Horseman dropped yesterday, about three-odd months after the first 8 episodes to S6 left fans on a cliff-hangar, with Bojack’s unusually peaceful circumstance on the verge of implosion. The half-season starts off more or less exactly where episode 8 of S6 left off, with Bojack beginning his teaching post at Wesleyan University while, concurrently, two journalists chase down the truth behind his involvement with Sarah Lynn’s death. These 8 episodes round off a series that has run for 6 seasons and as many years. Widely regarded as one of the best running shows on the air, most certainly one of the best animated shows for a considerable period of time, Bojack stars Will Arnett, Amy Sedaris, Allison Brie, and Aaron Paul among others. The show was created by Raphael Bob-Waksberg.

It seems like an age since I sat for 4 straight hours to watch the first half of S6, and immediately got up to go write the review for it. I was, at that point, slightly underwhelmed with what the first half of the season had to offer, but very much looking forward to seeing where they chose to go from there. One way or another, the cast and crew were tasked with ending a mammoth of a show, one of the best things on TV in the last 10 years and one that has left a mark on its audience one way or another. The task was monumental.

Whether or not they succeeded depends a little bit on how you define success in this area. Quite frankly, S6 was, holistically, the weakest and least rounded season of the show, even and especially when combining both its parts. A lack of rounded-ness ought to be the central idea here, because the show skews itself quite hard for S6. Comedy becomes a guest appearance, changed up for a deeper dive into character psychology and existentialism. There’s nothing wrong with that, in fact, that’s only a good thing, but Bojack has always been a show which has been able to do both at the same time, and I do think that, in general, S6 oscillated with greater frequency between quality, well written existentialism and rather unnecessary psychedelics. It’s possible I’m being a bit harsh, if not in my assessment then at least in the omission of an acknowledgement of the baseline attributes of the show, which remain as good as they always are, and there are moments of genuinely striking philosophical conversation (most of the second last episode comes to mind). That said, S6 does, without a doubt in my mind, lean toward a particular type of content, disturbing the unprecedented balance that they managed to find for 5 seasons before this one.

The saving grace of S6 turned out to be the last episode, which I suppose I should’ve seen coming. It’s a really beautiful episode, and a fitting end to one hell of a show. It just seemed to have…everything. Everything the show has ever had, it had it in this episode, from comedy to sobriety to running gaffes to satisfying endings for characters. I actually think they did a great job of figuring out the right places for some of these characters to finish their stories, and where they didn’t it didn’t feel like much of an end per se. I love what they chose to do with Diane, for example. I’m a fan of Guy and their relationship, and I appreciate how they choose to let her be happy. That was a worry for me going into this half season: the show needed to make a decision about the kind of message it was propagating. They haven’t exactly said anything explicit, but the two best scenes of the last episode, and probably the 6th season overall, between Bojack and Todd and Bojack and Diane respectively, kind of give a not-so-veiled hint. More on that a little later.

They manage to create a sense of an ending without really finishing most of the character’s storylines. Mr. Peanut Butter doesn’t exactly get an ending per se, but his involvement does feel very complete in his last scene (thank god they got rid of Pickles, and they managed to do it in a kind of funny way so good on them). Another of the better scenes of the season was Peanut Butter’s goodbye with Pickles, during which I have to acknowledge the work of his voice actor: Paul F. Tompkins. Princess Carolyne’s ending is pretty satisfying as well; she and Jonah have a uniquely sweet relationship which I’m glad worked out. Her last scene with Bojack is lovely as well, adding to what I have to reiterate as one of the best episodes of the show. One of if not my favourite scene was the one with Todd on the beach. One of my main criticisms of S6 in general is that we didn’t get enough Todd, who is, without a doubt, the cure for all things. His whole thing with his Mom this season was a little meh (even if it did involve the last hurrah of character actress Margot Martindale, possibly my favourite and most consistently funny running gag of the show), and I wish we’d got a more in depth arc for him this particular season. Nevertheless, his last scene is beautiful, and Todd bows out as the best among a crowd of phenomenally drawn characters.

So what about Bojack himself? This season saw the steepest emotional ups and downs from him. It starts off close to perfect, then it implodes. Then he fixes it, then he implodes again, then he almost drowns in what used to be his own pool after a drunken and drugged marathon of Horsin’ Around. And then he’s kind of okay again. It’s a topsy-turvy ride, and one that I felt had the tendency to get a bit emotionally numbing after a while. There is only so much we can see the guy go through, good and bad, and it gets dangerously close to getting so much that I almost stopped caring. Nearly, and had the show gone on for one more episode I think they would’ve fallen into that trap.

Luckily, they ended it the way they did. With the weight and the mixed-ness only Bojack could’ve ended with. Weight is the right way to describe it, because you don’t exactly feel good or bad about the way the show ends. It’s just kind of…continuous. Bojack lost a lot, Hollyhock’s gone, he’s in prison, the money he lost. Situationally, he’s in the hole, yet strangely it doesn’t exactly feel that way. There’s a contentment to the situation, a thoroughly un-dramatic commitment to improvement. The show ended up being about struggling, but not just how we lose to it. Between Todd’s scene on the beach and Diane’s scene on the roof, two of the best scenes in this damn show, it becomes clear that Bojack Horseman chose to end as a show about how life goes on, despite pain and suffering, and that the difficult choice is to choose to be okay, and then act on that. That’s part of why I love what they did with Diane so much, because when it came down to it, she just chose to do what made her happy. Bojack ends up at that crossroad too, in some way, but he’s there calmly, after all the crap. There’s something beautifully heavy, about that. Not in a melodramatically emotional way, in fact, quite the opposite. You do the hokey-pokey…then you turn yourself around. Wow, I love Todd. Bojack’s last moment on the show is bittersweet in the same heavy way, it really feels like that’s all they needed to say about him, and Diane. It didn’t bother me that after that scene, they got down from that roof and continued with their lives. It didn’t bother me that I won’t know what happens. They showed me what they needed to.

Bojack Horseman was a hell of a show. I jumped on the train a little late, I started watching around when S5 dropped, so S6 was the first season which I saw as it released. I’m extremely grateful to the creators and the voice actors and the rest of the crew, as well as Netflix, for giving us this story. I had a bad feeling, before this half of S6 dropped, that the show was going do what many expected: jump into a nihilistic pit of despair and remind us all that life isn’t worth living anyway. Instead, they ditched the angst, and for that all the threads came together for a conclusion befitting of a fabulous series, one of the best out there. S6 on its own might’ve been the weakest season for me personally, but boy did they end it right. A salute, if you will, to Bojack Horseman. One hell of a show.