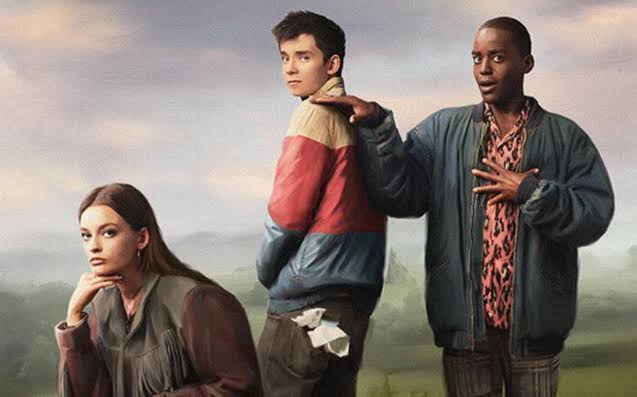 The long awaited second season of Netflix’s smash hit original series, Sex Education, dropped this past month to heaps of positive feedback. The season kicked off immediately off the back of the previous season, wherein, upon returning to school, a wave of socially-conjured Chlamydia pulls Otis back into the sex-advising business. The show stars the full returning cast of Asa Butterfield, Ncuti Gatwa, Emma Mackey, and Gillian Anderson among others, as well as new cast members Sami Outalbali and George Robinson.

Altogether, I was slightly underwhelmed by season 2. I waited a little to watch it, during which time I was getting reviews from my friends the likes of which I could hardly believe. High expectations were probably a factor in my general dissatisfaction in a season which, to be fair, commits only the crime of being a little less good than its first season.

It has to be said that the season 2 does maintain most of the charm of the original season from last year. The writing, in terms of the syntax if not storyboarding and overall character arcs, is more or less just as good. It felt like it was maybe slightly less funny, but I have a feeling that has more to do with the fact that I haven’t re-watched the first season since last year. They still create an interesting visual atmosphere that feels every bit as distinctive, and some of the classic tropes still shine through as unapologetically as was reasonable. It’s really refreshing to see such a categorically mainstream show throw sexual taboo and convention so far out the window, then light it on fire. There’s an extent to which kids of my generation need to see this show, if for no other reason than to be literally sexually educated. In that sense, there’s almost a public service this shows does for you, and that’s something that shouldn’t go unappreciated.

My issues with season stem mostly from where they decided to take the characters. Eric’s entire romantic activity in this season is a little questionable. Rahim is a little underdeveloped; an eccentric character is fine, but we don’t get any time to appreciate his eccentricities. Their relationship kind of feels like it works because of the way a rather well cast Outalbali does a good job of very convincingly doting, but it ends up lacking any substance. The same ends up being said, however, for his relationship with Adam. Adam is a bit of a disappointment to me. Once the shock of last year’s detention goes away, you come to realize that there isn’t a lot about Adam. He starts this season strong, with the whole military school angle. His expulsion from there is really good, too, and it’s a little unfortunate when they don’t take his character any deeper than that. They make him tragic, but not nearly endearing enough for me to like him. I was never sold on Otis and Ola; it’s a shame because they’re two very good performances but lacking in any kind of chemistry. Ola’s character tended to get annoying too, and, considering her chemistry with Otis doesn’t even belong in the same universe as Maeve’s, watching them gets tiresome. Her sabre-rattling with Maeve is entertaining, but isn’t worth it. Honestly, one of the things that made season 1 great was Maeve and Otis’ dynamic. I understand the need to nix that, in as a result of the way they took the story, but it didn’t work, and the show didn’t fill the hole that their dynamic left. The best scene of season 2, by some distance, was when Maeve struggled to express herself and finally threatened to punch Otis in the face if he ever bought her another birthday present. If only we’d had some of that.

Otis’ own journey is fine, with the exception of a lack of Maeve. I actually quite liked his bits with his father this season, even if it was stretched a little. His relationship with his mother only got better, which was a given in my head. They couldn’t really have screwed that up. I really appreciated the whole Jakob angle, from where it starts to its fitting fruition. Maeve’s own journey throughout the season has its high points too, in fact, I’d say her character fares better without Otis than Otis fares without her. The whole up and down with her mother is very well done, and genuinely heart-breaking in the way that it ends. I also very much appreciated Jackson’s arc, which might’ve actually been the most interesting part of the show now I think about it. The self-harm aspect was something they added subtly and appropriately, and his relationship with Viv was nice to see.

The ultimate reality of this season of Sex Education is that they maybe tried to do too much. They tried to dive into too many characters, juggle too many threads, to make their development deep enough. I appreciate the attempt to shift spotlight, but they’ve shifted it a bit much and not all of it worked for me. The whole thing ran at 75% of the first season, with a few key exceptions being the scene I mentioned before, the whole feminist sequence (starting from Amiee’s whole experience on the bus and ending with them all sitting on the bus, which was another real highlight of the season) and Otis’ escapade with Ruby (the case of the missing condom). Without giving adequate time to any one theme this season, not enough of them were good enough.

That said, I am looking forward, big-time, to season 3. I have a good amount of faith in these writers and this cast to get better going forward, especially considering that all of the above criticism doesn’t change the fact that it was still a really enjoyable season of television. Season 3 has not, as of yet, been officially renewed. That said, I don’t think we have much to worry about in terms of getting more from Otis and co. next season.