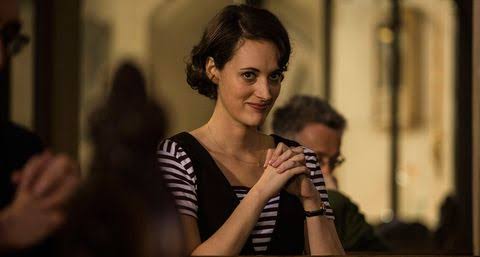 One of the most well received feature shows of this recently passed awards season, Fleabag is the story of an unnamed protagonist, referred to as ‘Fleabag’, a woman living in London. The show deals with her life as she deals with loss, family, and coming to terms with her own personality. It will come as a surprise, perhaps, based on that description, that Fleabag is a comedy, first and foremost. Written and starred in by the hilarious Phoebe Waller-Bridge, who also wrote and starred in the original play the show is based off of, alongside Oivia Coleman, Sian Clifford, and Bill Paterson, as well as Andrew Scott in season two, Fleabag has concluded its run after two celebrated seasons.

The show’s reputation precedes itself. Phoebe Waller-Bridge has got to be the most decorated woman in Hollywood right about now, after she picked up three Emmy’s for her work on the show, which is, by the way, exceptional. I’ll say this right off the bat, season one qualifies itself as ‘fine’ in my head. It starts off somewhat tiresome for me; the characters take their time imprinting themselves to the point where you’re watching out of a desire as opposed to a curiosity. I say that, but it’s only true in the context of the show, a season of which is 6 half-hour episodes. It’s not easy to drag with that kind of length, and it’s probably because of that that the drag disappears reasonably quickly. Once it does, Fleabag is a hilarious (I mean seriously hilarious) and sophisticated series, one of the most well rounded things on television, right up there with This is Us and BoJack Horeseman. The balance it finds between comedy and very real human struggle is something quite unique, managing to communicate a lot of genuine emotion without the comedy ever coming across forced or out of place. The credit for that goes to some spectacular writing and some stellar performances. It’s not an easy thing to do to combine a communicative performance with as comedic one, but the entire cast has done an exceptional job packaging both at equal levels for a script that demanded it.

As I mentioned, season one is very good but not incredible. That changes, very much for the better, with the start of season two. Fleabag’s recognition has come largely after season two, and for good reason. Andrew Scott is fantastic as the Hot Priest, I mean really exceptional, and the addition of his character in the context of the show works on all cylinders. From the way they discuss to religion to the role (not exactly figuratively) that God plays in the show, season two combines al the themes of the first season with a little more spice and a little more excitement that left me as an audience member completely fulfilled at the end of every episode. I’m really glad to see more creators jumping to the 22-minute episode format, it just makes the audience’s life so much simpler. The difficulty with that format tends to be the task of starting and finishing an arc in 22 minutes, which is enough to deter some but which Fleabag does exceptionally well.

Characters in the show are just rounded too well. Fleabag and Claire’s relationship is done fantastically, striking just the right tone to keep it from being cheesy while making it heartfelt. The whole dynamic with the father is strong, with an unsung Bill Paterson coming good. I don’t know that Olivia Coleman’s character sizes up to the rest, but any shortcomings in the character’s fabric are made up for, and then some, by a characteristically superlative performance from the Academy Award winning actress. I’ve already mentioned it, but the way they combine comedy with dramatic sophistication is really unique and incredible and deserves every bit of recognition it’s been getting. Stylistically speaking, I loved the kind of self-aware, almost super-natural trope Fleabag’s character had. In more ways than one, the show is actually quite stylistic. People who’ve seen the show will know what I mean, and those who haven’t will soon, when I refer to the really intriguing relationship the Priest had with us as an audience. It’s a testament to the layers and levels the show chose to operate on, which are held together, again, by a script that allowed for those levels.

Fleabag deserves every bit of recognition it’s getting right now. Season one is fine, quite good even, but is absolutely crucial in the role of putting a far superior season two into context. The whole way through, I found myself unsure of how I felt about Fleabag as a character. She presents herself as very Bojack-esque: broken and unwilling to be fixed. I actually think Fleabag might have a slightly more wholesome take on the character by the end of it. I do genuinely believe that the last five minutes of this show are the best of the entire series, and for the symbolism of how it all ends, I could not be more appreciative. Phoebe Waller-Bridge cemented her reputation as one of the strongest comedy-drama writers in the field at the moment for a show that absolutely lives up to the hype. Fleabag is one of the strongest shows on TV right now, and I’d encourage anyone to give it a watch.