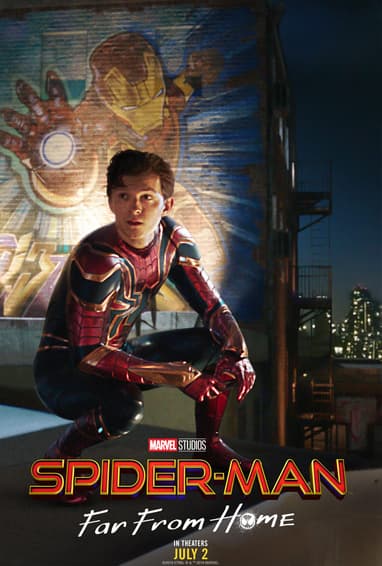 Because Disney hadn’t taken quite enough of our money with Endgame, this summer saw the release of the actual final film of the third phase of the Marvel cinematic universe: Spiderman: Far From Home. The film takes place soon after the events of Avengers Endgame, as Peter Parker and his friends embark on a soon-to-be-derailed summer vacation around Europe. The trip goes according to plan, until a group of otherworldly elemental creatures threaten Earth, dragging in tow a mysterious defender, supposedly from an alternate reality. The film stars the returning cast from Homecoming, as well as Jake Gyllenhaal as Mysterio/Beck and Samuel L. Jackson returning as Nick Fury; among others.

I honestly thought I wouldn’t be interested in an MCU movie after Endgame. I had this great plan where I was going to phase myself out (the use of the word phase is regretted) of the audience, preserve my memory of phase 3 as it was, and make as much fun as possible of the next batch of unsuspecting Disney-patrons for not having an appreciation for the classics. It was a good plan, until they released the trailer for this damn movie. The expectations were high, after a very good first film in the form of Homecoming and a strong character base to carry it forward. Not only that, but this was to be our first glimpse of a post-Endgame world, put simply, a world without Tony Stark.

And yet Tony Stark ended up being a character in the film, within the capacity he could’ve been. Some of my favorite parts of the film are little nods to the Godfather, EDITH’s acronym, the scene in the plane where Peter’s talking random science words and fitting his arm into holographic projections, and any other scene that communicated that passing of the torch. I really appreciated the “filling of the shoes” idea that was absolutely pervasive in the film. The comedy generally landed, as per MCU standard I’d say, and the performances were generally all good. One of the performances that was really of quality was that of one of the best actors currently acting: Jake Gyllenhaal.

Now if only he hadn’t been steering a sinking ship. One of the biggest negatives of the film, and you’ll discover there are actually many, is Mysterio’s character. They actually did a fantastic job at first, with the building of a rapport between Peter and Beck in the first third or so of the film; their obvious friendship off screen came through hard and it really served the larger purpose. Unfortunately, the moment the reality of it all was revealed, in that bar scene, the film fell off the rails for me. Despite building up to that point really really well, Mysterio’s character was unfocused. His motivation was fuzzy, how long he planned on fooling everyone with his orchestrated battles, before a drone hit Thor in the head or something, is beyond me. “To make them listen”? To what exactly? There was no clear ideology or motivation that made this guy tick. Tony Stark gave his work a funny acronym. How traumatizing. Also, I’m not a huge fan of what ended up being the premise of the character’s threat. The drones felt flimsy to me, I was expecting him to be a villain but I was expecting magic and unpredictability and some kind of otherworldly force. Obviously this ended up being the illusion, but to what end? Gyllenhaal nearly manages to redeem it, but even an actor of his stature couldn’t make up for the literal production element of his villainy.

Now, of course, we just have to talk about those post credit scenes. I actually saw a lot of inconsistencies with Nick Fury’s character in the film, which was triggering me until the last credit scene at which point I was saying “that explains it” and “what the hell” at the same time. I was actually really annoyed by that last scene. As far as I’m concerned, that was a sad, dumb gimmick, meant to produce a laugh, and ended up cheapening the plot of the movie. Nick Fury wasn’t even there, and that cheapens any weight his character gave to any situation he was involved with in the film. I absolutely cannot explain that decision for the life of me. As for the mid credits scene: that was bold. I’m definitely stressed out about it, and as annoying as it is to me, that just shows me that I’ve committed to this character and that I’m on the edge of my seat to find out what happens next. I do, however, take issue with the tonal shift. As an audience member, the MCU isn’t where I go for Black Mirror-esque thematic warnings about our trust in digital evidence. I was a lot more bothered by it just after walking out of the theater; having ruminated a little I’m pretty okay with it, but it’ll all depend on where they choose to go from here.

All in all, I think it’s safe to say that I was underwhelmed by this film. I’ve done a lot of stressing on the negatives here, partly because the negatives ended up forming a larger part of the fabric of the film than the positives. I liked Peter and MJ, a lot. Holland and Zendaya’s chemistry is pretty strong, and I generally appreciate MJ’s character, which I was a little concerned about after the first film. Little moments of good comedy and quality writing aside, however, the bottom line for me was that Far From Home was a slightly lazy film. It didn’t feel the need to hold all that many strings, there wasn’t a whole lot going on. The strings it did hold were largely undercooked, with the possible exception of the Tony Stark-less element. It was a such a disappointment, especially after Beck was so well done for the first 40 minutes (Gylllenhaal wearing the glasses was a moment. It was). But the conclusion here for me isn’t a great one. After so long backing up popularity with a greater degree of quality than most hugely popular pieces of entertainment media lacked (in the important places anyway) it would be a real shame if Marvel started getting complacent, and that’s what this film was: complacent.