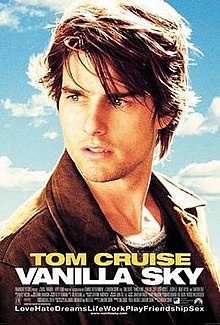 My Tom-Cruise-can-actually-act revolution continued with Cameron Crowe’s Vanilla Sky. Vanilla Sky is a film following the story of an indulgent, entitled young man, who inherited his fathers publishing empire. With the world at his fingertips, he lives what could only be described as the dream; until his antics catch up with him when a resentful lover steers him into a life-altering car accident. The film stars Tom Cruise, Penelope Cruz, Cameron Diaz, and Kurt Russel, and was nominated for an academy award for Best Original Score, which was written by Paul McCartney.

Tom Cruise impresses once again as the affluent and naïve playboy David Aames. I will never be able to understand why Tom Cruise makes films like Jack Reacher and The Mummy. The guy is legitimately an incredible actor, and deserves to be known for more than his stunt work. He brings a kind of lean vulnerability to this role that impresses immensely. His chemistry with Penelope Cruz in this film is fantastic, selling the hell out a relationship that looked doomed to be the victim of stale writing. The writing is generally tolerable, the dialogue unspectacular but a ways off poor, and the character work is generally strong. Cameron Diaz, who was the most acclaimed performance in the film (Golden Globe nominee), was very good, but in a role that I didn’t perceive a lot of depth in in the first place. Her motivation comes across really quite fickle, but it’s not something that stuck up like a nail in the film much. The foreshadowing of a car crash was so enunciated that it seemed inevitable one way or another. In that sense, my real grievance with her character stems from her narrative stamina after death, which is substantial while unsubstantiated. On a side note, as it ended up being, Kurt Russel was strong in the minimal role he was afforded.

The concept behind the film is very strong, but suffers from what I tend to call getting drunk on complicatedness. The first two thirds of the film are really very strong, incorporating the meat of what I’ve already mentioned, coupled with an engaging storyline. I was satisfied; and interested in the continuing narrative. My disappointment began to blossom, however, as the film turned unceremoniously into a science fiction film. Vanilla Sky is a psychological experience, and a good one at that. The complexity of David’s experiences and confusions were compelling and heartbreaking in their own right, and did not require what the last third of the film did to the storyline. A lot of psychological films tend to fall into the pseudo-edginess trap, which this film managed to avoid emphatically until the whole “lucid dream” aspect of the film came into play. This arc was completely and utterly unnecessary. It introduced a sense of needless ambiguity into what had, until that point, been a more than adequate rendition of hallucination and confusion. I just felt that it took the plot of the film and placed it in a brand new and, frankly bizarre context.

The resulting context that the end of the film was then placed in was problematic for me as an audience. The whole relationship that they had built, or most of it at an rate, was annulled, as well as the tragedy behind most all of the resulting events of the rest of the film. Aside from feeling like a cop out from the writers, which it absolutely did, it kind of made the whole film seem somewhat pointless. After all the trauma and pressure that came with a life threatening accident, disfiguration, and the horror of killing the people you love the most against your better instinct; it turned out none of it really mattered. They literally used the ‘it was all a dream’ move to tie it up, which reeks to me of a writer’s unwillingness to get his/her hands dirty. Other than that, it just made the film feel strange. It existed on the plane of the real world until that point, after which it was in the clouds. None of it felt real.

This was a film with a lot of potential and decent execution up until the moment where they decided a ‘conventional’ storyline wasn’t for them. The result was an undeniable lack of conventionality, but a subsequent lack of quality in the tail end of the film. I don’t think I would dissuade anyone from watching it, the first two thirds are, as I said, pretty good. Beyond that, however, I’d view it as a manual of how not to handle a story.