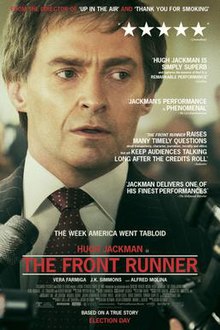 Hugh Jackman’s (or the Jack-Man as I like to call him) latest project took the form of former Presidential candidate Gary Hart biopic titled The Front Runner. Jackman plays Hart as the lead in the film which also stars JK Simmons, Vera Farmiga, and Bill Burr among others. The film is about the true story of a presidential front runner named Gary Hart who led the Democratic Primary race by a 12-point margin. His ideas were revolutionary and his middle name popularity as the primary grew nearer, but his campaign eventually fell to pieces in the space of three weeks after news of an affair he had sank his moral credibility. The film, after it released, was discussed for Oscar recognition; however, it did not end up being nominated for any major awards.

I knew full well before watching this film that I was going to like it. Idealistic politicians, a romantic message, and Hugh Jackman; what could I possibly not like about this film? I was surprised, neither pleasantly nor particularly unpleasantly, by the effect the film had by the time I was done with it. Gary Hart, portrayed in all his likability and charisma, is portrayed in equal part as the flawed individual that he was. Jackman is very, very good as Hart; well cast for one thing, and you can see the amount of research he’s done. There’s a veritable mine of anecdotal information regarding the ways in which Jackman was allowed in to the Harts’ lives in the preparation stage of the film, and you can see that he’s put it to good use. Aside from him I’d say the acting is pretty standard/average. Nothing stands out, with the possible exception of the omnipresent JK Simmons, as anything more than actors acting.

The writing, however, makes up for a lot of the potentially bland performances. While perhaps not groundbreaking, the film has the striding pace demanded of many and most political dramas. Razor sharp turn of phrase and some truly potent, if a little grandiose, monologue writing add up to an engaging and pulsating watch. There exists, however, a painful lack of depth to the lot of it. The film is provoking without a doubt, but one gets the feeling of taking a leisurely dip into some of the issues discussed as opposed to a deep dive. Some would, I’d imagine, find this ponderous. I can see that interpretation, and even empathise with it to some extent, but I feel like the occupation of the big screen and the microphone that comes with it calls for more of a sturdy stance. I like that they never explicitly say whether or not the rumours of the affair were true; that feels in-keeping with the message that Hart projected: That’s not important. Ambiguity in that sphere is almost called for, but I feel like they could have done more for the discussion of the behaviours of the media and the composition of integrity in public office. Obviously they explore that, reasonably well, I might add, but it could be a lot less surface level.

The film certainly does ask questions. As much as they could have gone deeper, the over-arching message is one I absolutely love, and for that reason I do think the more people who watch this film the better. You find yourself furious with the newspaper you read that morning for the behaviours of its counterparts during the events of this film, while at he same time you have to wonder if they have a point. Is having an affair enough to invalidate all the visionary ideas a man has for the leadership of a country? It should come down to which matters more, but the reality is a lot more complicated than that. You find yourself contemplating the question, seeing as it’s being pretty much directly asked, “is Hart a victim or a perpetrator?” The prominence of that question in the film, along with the aforementioned fact that they never really tell you what is and is not true, results in a tug on your heart as you hate the behaviour of the tabloids masquerading as broadsheets.

All in all, a film definitely worth the watch. Jackman’s performance, with the aid of some skilful penmanship, manages to carry for a lot of the film’s ideological shortcomings, and the point they’re making is a potent one. Hart gives a speech, close to if not at the very end of the film, where he as good as breaks the fourth wall to deliver the film’s ultimate warning: If we allow these things to continue, we risk ending up with exactly the leaders we deserve. A thought well worth two hours of your time.