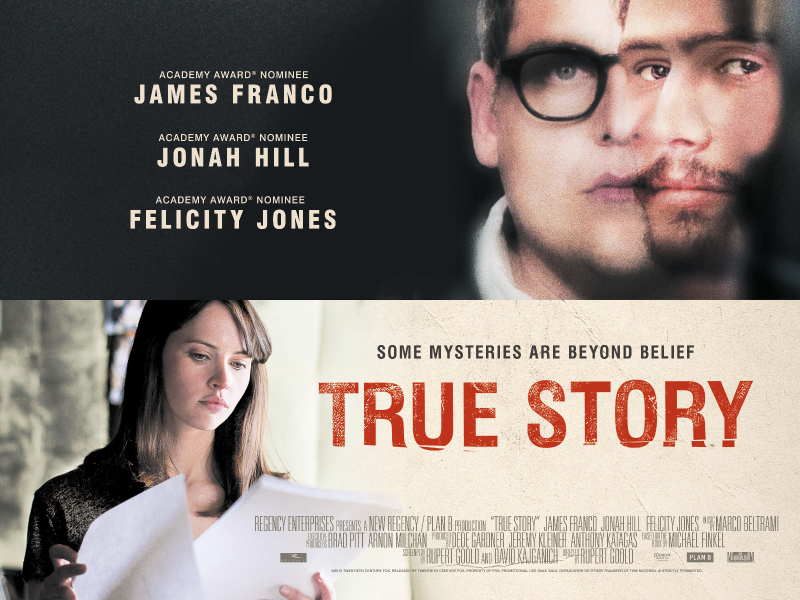 True Story is a 2015 film starring James Franco and Jonah Hill about the true story of the relationship between a murderer (Franco) and a once-starlet-now-disgraced journalist (Hill). Michael Finkel is a rising star in the journalism industry, until a bad decision regarding journalistic malpractice leaves him cut off from his many prospects. His life seems to be at a stand-still; until a man, Christian Longo, who allegedly killed his family, is apprehended after assuming Finkel’s identity. The film centres around Finkel’s interrogation of Longo, eventually turning into a criss-crossed psychological chess game between the two men. The film also stars Felicity Jones in the role of Finkel’s wife, and was directed by debutant screen director Rupert Goold.

The reason for my interest in this film was primarily found in the storyline. I’m endlessly fascinated by the idea of a complex and stimulating plot from a mastermind villain that only really makes sense at the end. In that sense, this film was a virtual gold mine for enigmatic device, which absolutely kept me glued from minute one. There’s a problem with this, however. For all the cloak and dagger that the film is punctuated with, by the end of the film you feel dangerously unsatisfied. Suspense-building is something done exceptionally well, I held my breath on many an occasion despite a pointed lack of anything inherently suspenseful happening on screen, but the endgame that the Goold has ended up going for is so thoroughly underwhelming that you just have to ask if there’s 20 minutes of the film that Netflix doesn’t have. It is a very affecting film, you feel incredibly shaken, but the climax is so underwhelming that you leave the film still looking left and right waiting for the shoe to drop.

As I said, the film is incredibly intriguing. Franco and Hill have done fabulous jobs of portraying a hesitant comfort with each other in a way that feels both familiar and distantly strange at the same time. Their performances and interaction deserves great credit; I only wish there could have bee more of it. One of the things that fascinated me most during the film was Felicity Jones’ character: Michael’s wife Jill. There’s a shocking tension between her and Longo that tugged so hard on my heart for reasons I absolutely cannot explain, all leading up, presumably, to some kind of reveal. That reveal never came, leaving me as an audience exceptionally frustrated. I never really felt the relationship between her and Michael, which was the point, I suppose, in portraying how Michael’s fascination with Longo turned almost into an infatuation, but I was waiting for something to snap there and it never did in a way that eased the pressure.

The way Goold has used music and light to make add deadly weight to innocuous things is, in my opinion, remarkable. There’s a consciously cold, detached feeling about the way the film is done, and the lack of obvious emotion in the storytelling adds more to the enigma that never unravels. Despite that, the response to the film was almost turbulently emotional. The use of certain motifs, like Longo repeating the words Finkel says to him while he’s on the stand and the wink, the best moment of the film by far, that Longo gives Finkel just after being sentenced to death row. The pissing off thing about those devices, however, is the infuriating lack of overall effect those motifs have on anything that happens in the film. The psychological game that Longo plays seems to be have been conducted for the fun of it. That has its own implications when you think about it, and might be even more interesting, but it makes for extremely annoying viewing at the end of the film.

All in all, I’m very conflicted after watching this film. On one hand it had a distinct psychological effect on me for a while after the credits rolled, but on the other hand at least one of those effects involved anger at the lack of real closure. Maybe that was the point, though. There’s an element of warning in the message of the film: this is what happens when you give people more attention than they’re due. Longo played a lot of psychological games for what seems like the singular purpose of being at the centre of someone else’s life, an incredibly selfish and frankly narcissistic motivation. The film, for me, is not about him so much as the effect he had on Finkel’s character, and the indescribably engaging vortex of secrets and lies built on air that Longo constructs around him as nothing more than an elaborate joke. This is a thoroughly engaging and thought provoking film that ultimately falls short of the promise it made, but I would argue that that might have been by design.